Both the LMP1 manufacturers’ and drivers’ championships had been won in favour of Audi before the final round, thus the race in Bahrain was a straight fight between Audi and Toyota with no championships at stake. 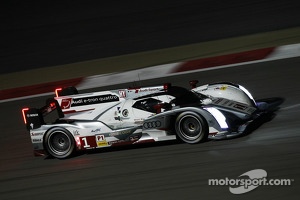 The first free practice session got proceedings underway on Thursday afternoon. The ninety minute session concluded with the two Audis being sandwiched between the two Toyotas. Toyota #7 set the fastest time during the first free practice session, leading the two Audis ahead of their teammates in the #8 Toyota. Audi #1 was the leading R18 e-tron quattro car in second place, with drivers Marcel Fässler, André Lotterer and Benoît Treluyer. Audi #2 was third fastest with the newly crowned LMP1 world champions of Tom Kristensen, Allan McNish and Loïc Duval.

The second session again saw Toyota leading the way at the front, but the interval between first and fourth had decreased. A total of 1.959 seconds split the top four during the first free practice session and this had come down to a mere 0.292 seconds covering the same four cars during the second session. The #8 Toyota was fastest this time, leading the #1 Audi R18 e-tron quattro. The top four was rounded out with the #7 Toyota in third and the #2 Audi in fourth.

The Toyota/Audi/Toyota/Audi order from the second free practice was reversed on Friday morning, as Audi #2 set the fastest time during the third and final free practice session. They were followed by the #8 Toyota in second and Audi #1 in third, ahead of the fourth placed #7 Toyota.

Qualifying was a front row lockout for Toyota and Audi was relegated to the second row of the grid, with Audi #1 qualifying in third, followed by Audi #2 in fourth. Toyota #7 had taken pole ahead of their teammates in Toyota #8.

The race got underway with the two Toyotas taking control and building a gap at the front, with the two Audis following behind them. Audi #2 with Kristensen behind the wheel was the leading Audi and Audi #1 with Treluyer was dropping back during the first stint. Audi #1 was also involved in spinning a GTE Ferrari and they received a warning for the occurrence.

Toyota continued to lead with a 1-2 at the front with the two Audis trailing behind them. The second placed #7 Toyota unfortunately suffered retirement due to a mechanical issue. This promoted the Audis into the top three, Audi #2 leading Audi #1, the pair running behind the leading #8 Toyota.

The top three continued to circulate within a thirty second time bracket, but just before halfway the #2 Audi came to a halt and retired on the circuit, thus promoting the #1 Audi into second, half a minute behind the leading #8 Toyota. The #1 Audi was later given a drive-through penalty for passing under yellow, thus dropping them even further behind the #8 Toyota.

The race at the front of the LMP1 field came down to just the #8 Toyota and the #1 Audi, with the positions remaining the same to the flag. Toyota won the final FIA WEC race of the year, followed by Audi #1 driven by Marcel Fässler, André Lotterer and Benoît Treluyer.

Mücke: No chance for title after engine damage at the season finale in Bahrain