Audi set the pace in The Prologue's first test session

All the teams present profited from the conditions to finalise their cars’ set up and work through their planned testing programmes.

The FIA WEC season has officially started, under the blue skies and sunshine at the Circuit Paul Ricard, and the first 4-hour practice session of The Prologue has now come to a conclusion.

All the teams present profited from the conditions to finalise their cars’ set up and work through their planned testing programmes, and it was Audi Sport’s No.2 R18 e-tron quattro which topped the time sheets at the end of the morning with a best lap of 1:42.788. Up until Marcel Fässler set this time, the No. 14 Porsche 919 Hybrid had been the pace-maker, its best lap being 1:42.912. The fastest lap for the No.12 Rebellion Racing (the team using its 2013 Lola B12/60 Toyotas for The Prologue) was less than a second behind the No.8 Toyota TS040 Hybrid – the gap between LMP1-H and LMP1-L being noticeably reduced. 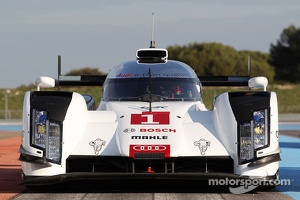 In LMP2 the Millenium Racing ORECA 03 Nissan of John Martin was the car at the front of the class with a best lap of 1:49.289. Second in class, and making an impressive debut in the FIA WEC, was the Russian-French-Italian line up in the No.27 SMP Racing ORECA 03 Nissan – Marseille driver Nicolas Minassian being just one tenth of a second ahead of Kirill Ladygin in the sister SMP car. The only two cars not to run this morning both came from the LMP2 category – the No.23 Millenium and No.26 G-Drive Racing entries.

The four LMGTE Pro cars at The Prologue were also all finding their marks, with the No.92 Porsche Team Manthey 911 RSR of Richard Lietz heading the class. The Austrian’s best lap of 1:58.080 was half a second ahead of the No.71 AF Corse Ferrari 458 Italia of Davide Rigon. The top seven drivers in the category posted laps which were all within a second of each other, many being new to the track and to the WEC.

Paulo Ruberti’s move to 8Star Motorsports has proved to be advantageous for the team, with the Italian setting the LMGTE Am category’s best lap: 1:58.852 to place him close being the Pro runners. The USA-entered No.81 Ferrari 458 Italia was just 0.118s ahead of the No.61 AF Corse entry, Marco Cioci doing the honours in that car with a fastest lap of 1:58.970.

The cars are back on track for the second of the day’s three sessions at 1400h, and another four hours of glorious sights and sounds are in prospect.

A new challenge for Ferrari and AF Corse