Audi set on battling for victory at Spa

Two aerodynamic versions of the hybrid sports car on the grid.

Ingolstadt - For the first time this year, Audi will be entering three R18 e-tron quattro cars in the WEC race at Spa (Belgium) on May 3  at round two of the FIA World Endurance Championship. The preparation phase for this event was particularly intensive. The accident damage sustained by the two cars in the season opener resulted in a lot of work.

The two accidents at Silverstone (Great Britain) were unfortunate for Audi in two respects. For the first time ever, the team of Head of Audi Motorsport Dr. Wolfgang Ullrich and Chris Reinke, Head of LMP, had to endure the retirement of all cars and the total loss of valuable championship points. The incidents caused considerable vehicle damage. The two monocoques of the hybrid sports cars were damaged. Consequently, cars number 1 and 2 had to be prepared again completely from scratch. As a result, the WEC World Champions at Audi are tackling an extreme workload between Easter and May 1.

In comparison, the preparation of the third race car seems almost like a routine task. Audi has traditionally been using the 6-hour race at Spa to prepare its Le Mans squad for the years most important endurance race. 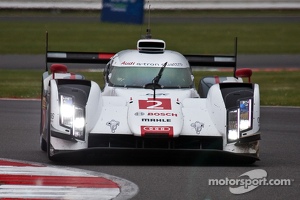 Belgium will see Marco Bonanomi (I) returning to the race car cockpit. Alongside Bonanomi, Filipe Albuquerque (P) will be celebrating his WEC debut with Audi after switching from touring cars to sports cars last winter. Oliver Jarvis (GB) has been released from the race at Spa and the test day at Le Mans  he will be battling for Championship points in the Japanese Super GT racing series at the same time. For the Le Mans 24 Hours, he will return to the R18 e-tron cockpit as the team-mate of Albuquerque and Bonanomi.

At Spa, car #3 continues an idea which Audi tested for the first time last year. The additional race car has a different body that can be recognized at first glance by the longer rear overhang. Its use in Belgium is very valuable for the Audi engineers, as the data generated by car #3 assists in validating the simulations which Audi previously performed. By the same token, the team can test how to handle the special body version and other technical modifications in racing conditions.

All three Audi driver squads are united in pursuing a single aim on the 7.004-kilometer circuit in the Ardennes with its unique combination of turns. Following the victories in 2012 and 2013, Audi is set on battling for the best positions at Spa again in 2014. The fastest single lap set by Tom Kristensen in qualifying at Silverstone and the best race lap achieved by André Lotterer show that the diesel hybrid sports car from Ingolstadt and Neckarsulm is fast on a single lap in the battle with Porsche and Toyota. In Belgium, Audi will be able to see for the first time whether this also strategically applies across the entire race distance when the effects of the energy regulations and the different ratings of the three hybrid concepts manifest themselves in the field.

Topics of the weekend

-Will qualifying be as thrilling as it was at Silverstone?


-What race strategy will result from the requirements of the new regulations?


-Will Audi be able to continue its good form this year as in the past at Spa?


-How will Filipe Albuquerque and Marco Bonanomi fare in their first joint WEC commitment?

Quotes by the officials

Dr. Wolfgang Ullrich (Head of Audi Motorsport): Weve got to prepare two new cars between now and Spa, which imposes an extreme load on the squad. Then were going to concentrate on running an impeccable race. At Spa, we want to rectify the unfortunate race at Silverstone. In the past years, Spa was a very good track for us.

Chris Reinke (Head of LMP): Were definitely going to attack again at Spa! Within only two weeks, the team has had to handle a tough workload. After the somewhat rocky start of the season at Silverstone, its now particularly important for us to focus on our next tasks until Le Mans. The squad has to get used to its processes. But Spa is more than just a test for Le Mans. We aim to win in Belgium and score points for the WEC.

Ralf Jüttner (Team Director Audi Sport Team Joest): We all have the aim of showing that Silverstone was an absolute exception. Were now in the unusual position of the hunter and need to score points. The team will be giving everything. Well be on the grid with three newly prepared cars. Were definitely not lacking motivation. Were going to strike back.

Facts and quotes by the Audi drivers

Lucas di Grassi (29/BR), Audi R18 e-tron quattro #1 (Audi Sport Team Joest)
-Was on podium with Audi at Spa last year
Im very much looking forward to Spa because the track is simply great and our Audi R18 e-tron quattro is very well developed. For us, the second round will be about scoring as many points as possible for the manufacturers and drivers classifications in the WEC.

Loïc Duval (31/F), Audi R18 e-tron quattro #1 (Audi Sport Team Joest)
-Won at Spa on his debut with Audi in 2012
-Finished as the runner-up last year
The configuration of the track is unique. And Ive got fond memories of my victory in Belgium on my debut with Audi two years ago. In the Ardennes, theres always a possibility for rain and temperatures may be very cool. Im eager to see what well be able to achieve there. Were going to battle for victory. Our motivation is high.

Tom Kristensen (46/DK), Audi R18 e-tron quattro #1 (Audi Sport Team Joest)
-Set the fastest single lap at the WEC season opener in qualifying
-Together with Loïc Duval, travels to Spa as World Champion
Every race driver looks forward to the challenge of mastering a track like Spa. Weve got to finish and score many points. This is particularly important because our tally of points is still blank after Silverstone.

Marcel Fässler (37/CH), Audi R18 e-tron quattro #2 (Audi Sport Team Joest)
-Has won six WEC rounds with his team-mates
-Has previously celebrated a 24-hour GT race victory at Spa
I always look forward to Spa. This is my favorite race track, no matter what car I drive there. In the Audi R18 e-tron quattro, this will be a special pleasure. Last year, we achieved victory there. At Silverstone, we were also able to drive a good pace. Thats why Im confident that this time well again be looking good at Spa.

André Lotterer (32/D), Audi R18 e-tron quattro #2 (Audi Sport Team Joest)
-Is driving together with Marcel Fässler and Benoît Tréluyer for the fifth year
-Set the fastest race lap in the season opener at Silverstone
In 2013, we saw an outstanding race at Spa. Im hoping that well be able to continue this form this year. This is one of my favorite tracks. I grew up in Belgium and still feel at home there. Im highly motivated to drive there. Weve got a lot of ground to make up.

Benoît Tréluyer (37/F), Audi R18 e-tron quattro #2 (Audi Sport Team Joest) -Won at Spa last year with Marcel Fässler and André Lotterer
-Is driving together with his team-mates for the fifth year
At Spa, were continuing our competition with the other four hybrid sports cars and the other entrants. At Silverstone, we had a very good beginning of the race. That made the fact that we didnt finish even more regrettable. Im very eager to see our potential across a full race distance.

Filipe Albuquerque (28/P), Audi R18 e-tron quattro #3 (Audi Sport Team Joest) -Is celebrating his WEC debut with Audi at Spa
-Looks forward to gathering a lot of driving practice with team-mate Marco Bonanomi
Following all the tests, Im now excited about my first race in the Audi R18 e-tron quattro. We prepared step by step and are hoping for a good race. The car is great fun. I can hardly wait for my stint.

Marco Bonanomi (29/I), Audi R18 e-tron quattro #3 (Audi Sport Team Joest)
-Was on podium at Spa in 2012 on his WEC debut with Audi
-In the Ardennes, is contesting his first race in the 2014 season
Im very happy about being able to race for Audi again. Well be driving a car with different aerodynamics than the two sister race cars. We do this to prepare for our Le Mans commitment. After our tests with this body version, Im confident. And within the squad of Audi Sport, Audi Sport Team Joest and among the drivers the atmosphere is good, too.