Audi remains in front after Austin 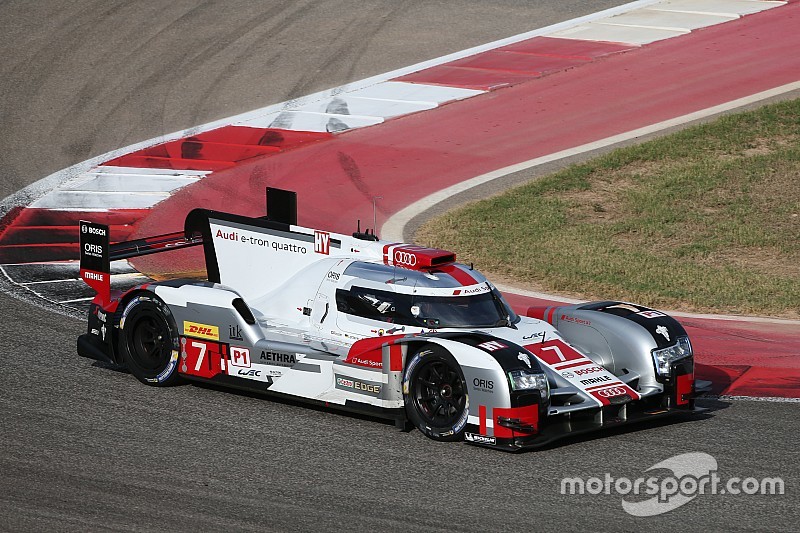 Marcel Fässler, André Lotterer and Benoît Tréluyer maintain their position at the top of the FIA World Endurance Championship (WEC) with Audi.

The driver trio of the number ‘7’ Audi R18 e-tron quattro took second place on the circuit at Austin, marking its fifth consecutive podium finish this year. The 2012 World Champions have been leading the drivers’ standings since the beginning of the season. For the first time this year, car number ‘8’ clinched a podium result as well.

Audi braved the heat in Texas: The brand with the four rings was the only manufacturer in the LMP1 class to bring its cars home without any setbacks. The 6-hour race started with air temperature of 34 degrees centigrade and 42 degrees on the tarmac, making maximum demands on the teams. The technology of the two hybrid sports cars with the four rings ran reliably and the vehicles merely required fresh tires and new fuel during the pit stops.

At Austin, we were the only manufacturer to finish the race with both cars without any technical issues,

Fässler/Lotterer/Tréluyer were not unsettled by the understeering of their race car either and after six tough hours of racing achieved second place. The result has increased their point score in the drivers’ standings to 113, which means they have retained a ten-point advantage over the Porsche drivers Timo Bernhard/Brendon Hartley/Mark Webber, the winners of Austin.

Lucas di Grassi/Loïc Duval/Oliver Jarvis (BR/F/GB) in the second Audi R18 e-tron quattro, designated as car number ‘8,’ in third place, had secured the better grid position within the Audi squad. In the race, the driver trio maintained position three up to lap 99 when a penalty caused them to drop back. The stewards imposed a one-minute stop-and-go penalty after a mechanic had dropped a wheel on the ground – an extremely rare mistake. Afterwards, car number ‘8’ recovered and the drivers celebrated their first podium result on seeing the checkered flag.

“Both of our driver squads showed flawless performances in what have been the hottest conditions so far this year,” said Head of Audi Motorsport Dr. Wolfgang Ullrich. “In spite of spending more than an hour and a half in the cockpit per stint, each driver delivered a consistently strong race before turning the car over to his teammate. At Austin, we were the only manufacturer to finish the race with both cars without any technical issues, but in the end had to admit defeat to Porsche in the battle for victory.”

Chris Reinke, Head of LMP at Audi Sport, praised the performance by the entire squad. “We lost valuable practice time on Thursday due to technical issues. Consequently, in preparing for the race, we weren’t able to check off some of the items on our list such as the important endurance runs of the tires. But no-one was unsettled by this. We showed a concentrated performance and delivered a solid race in challenging conditions.”

The next challenge in the World Championship is coming up in three weeks from now. On October 11, Audi, as the leader of the standings, will be contesting round six in Japan. The third from last 6-hour race of the 2015 season will be held on the circuit at Fuji – the World Endurance Championship is turning onto the finish straight.