With more than 1.34 million worldwide deliveries, Audi equaled last year’s sales record after only eleven months. And in motorsport, the brand with the four rings continues to charge full speed ahead too. The title defense in the FIA World Championship (WEC), the commitment in the DTM and extended activities in US racing are particularly in focus in the 2013 season.

"Successful motorsport is part of our brand DNA," stated Wolfgang Dürheimer, Member of the Management Board for Technical Development at AUDI AG, on Wednesday night at the "Audi Sport Finale" held at the Audi Forum Ingolstadt. "The victories on the world’s race tracks underscore our technical expertise in a particularly authentic way - and they strengthen our position on the most important world markets." 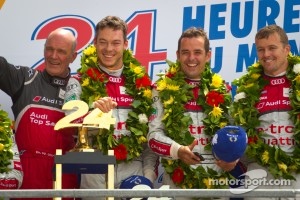 In the FIA World Endurance Championship (WEC), Audi is competing as the title defender in 2013. Audi Sport Team Joest will be fielding two updated Audi R18 e-tron quattro cars, a third R18 e-tron quattro will be running at the Le Mans 24 Hours and the WEC race at Spa.

At Le Mans and in the WEC, Audi is thus exclusively banking on hybrid technology that was successfully introduced in 2012. The flywheel energy storage system is becoming even more powerful without any substantial increase in weight and size. Strictly in terms of its exterior, the Audi R18 e-tron quattro will hardly differ from this year’s winning car although numerous technical innovations are again assembled under the vehicle’s ultra-light carbon fiber skin. In a parallel project, Audi Sport is already intensively working on the successor car for the new LMP1 regulations that will come into effect as of 2014.