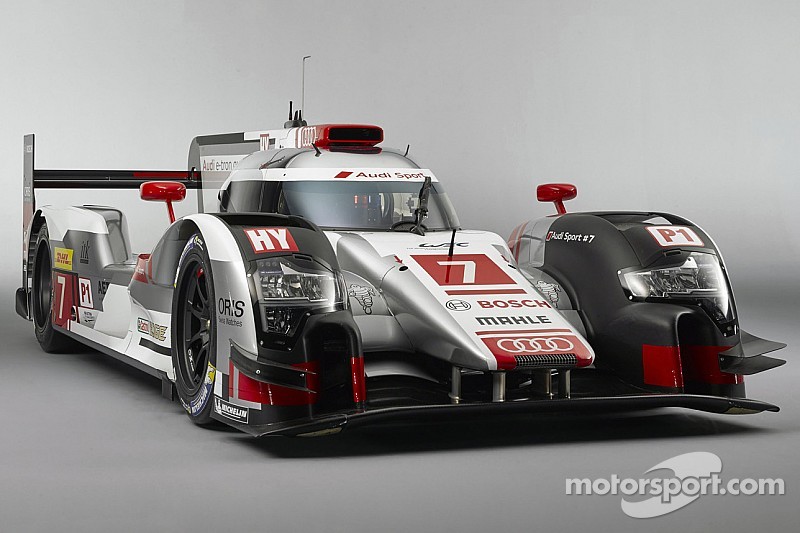 Sportscar giant has revealed the full technical specifications of its fifth generation Audi R18, which will bid for further Le Mans glory.

Audi will compete in the 4-megajoule class of the World Endurance Championship, doubling its output of hybrid energy for its 2015 campaign.

The German manufacturer will take the fight to champions Toyota, recent top category returnees Porsche and newcomers Nissan, with a car boasting fundamentally revised aerodynamics for the fifth generation of its R18.

The 2015 R18 e-tron quattro is based on the same tub as its predecessor but visually differs from a new way of conducting airflow around and through the front end, in the area of the sidepods and at the rear of the LMP1 prototype.

Large air inlets in the front wheel arches reduce aerodynamic drag of the body and have led to an all-new design of the headlights.

While reusing the monocoque, the hood with the front wing and wheel arches features a new design. As this body element incorporates the crash structure, a new crash test was required for the 2015 season.

Modified airflow through the sidepods with new radiator configurations for cooling the engine and the hybrid system further optimizes aerodynamic drag. The engine cover encloses the unit even more tightly and notably tapers off behind the cockpit.

Audi, which has won every Le Mans 24 Hours in the hybrid era, is taking the next step in the area of energy recovery. Its engineers have doubled the amount of energy from 2 to 4 megajoules per race lap at Le Mans.

During braking, energy is recovered which the system subsequently feeds back to the front axle on acceleration. The electrical machine that performs this task now delivers an output of more than 200 kW (272 hp), which is a significant increase compared to last year.

It has increased the capacity of the energy storage system as well. The encapsulated flywheel energy storage system that sits in the cockpit, alongside the driver, can store up to 700 kilojoules of energy that it subsequently returns to the electrical machine – about 17 percent more than in 2014.

According to the regulations, the fuel-energy amount has to be further reduced if the engineers opt for higher hybrid output. As a result, the R18 e-tron quattro has to make do with 2.5 percent less diesel fuel per lap than in 2014.

As another new rule this year, only five engines per car may be used during the entire season.