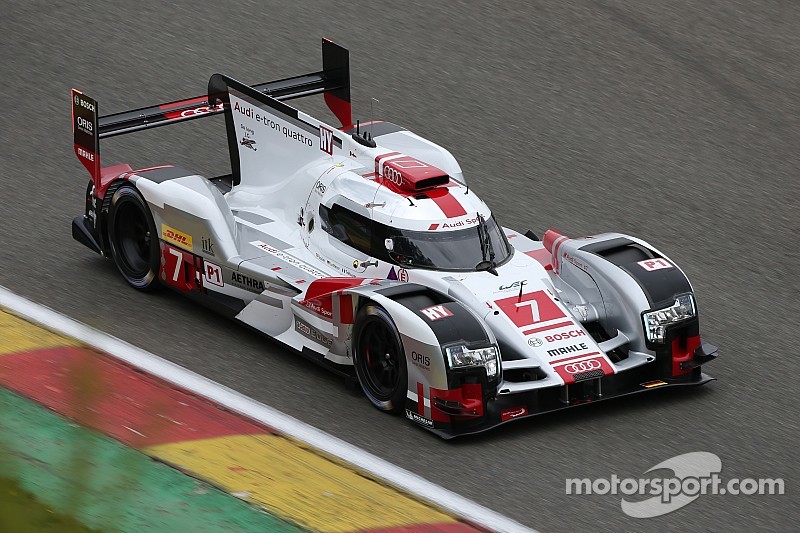 Ingolstadt/Spa, May 2, 2015 – Following the thrilling season opener of the FIA World Endurance Championship (WEC) in Great Britain, Audi was unbeatable again in Belgium. On the challenging track at Spa, Marcel Fässler (CH), André Lotterer (D) and Benoît Tréluyer (F) proved their class again on clinching their second victory this season and tenth WEC success in total.

Audi extends lead of the standings before Le Mans 24 Hours

In the presence of Prof. Dr. Ulrich Hackenberg, Member of the Board of Management, Technical Development, AUDI AG, Audi extended its lead in round two of the Championship. Fässler/Lotterer/Tréluyer had traveled to Spa with an advantage of seven points. Now, before the season’s pinnacle event, the Le Mans 24 Hours on June 13 and 14, their advantage amounts to 14 points. After starting from position four, the 2012 World Champions had stayed on the heels of the front runners and improved to third place during the first laps. Marcel Fässler spinning in the first hour temporarily cost car number ‘7’ one position but the Swiss and his team-mates made a quick recovery.

It was a tough lights-to-flag job, just like at Silverstone,

Four hours into the race, André Lotterer in the hybrid sports car took the Audi into the lead for the first time. The 54,000 fans in the Ardennes witnessed a gripping battle for position one that saw the lead change after each pit stop. The battle came to a head in the final stages. 90 minutes before the end, Benoît Tréluyer took the top spot from Porsche driver Marc Lieb, benefiting from the efficient combination of the V6 TDI engine and e-tron quattro hybrid drive, new aerodynamics for Le Mans, as well as tire wear being lower compared with the competition. The Frenchman saw the checkered flag with an advantage of 13.424 seconds. “What a race,” Tréluyer said. “It was a tough lights-to-flag job, just like at Silverstone, but it was huge fun and we’re already looking forward to Le Mans.”

Car number ‘8’ was doing well at first too. Loïc Duval (F), who races together with Lucas di Grassi (BR) and Oliver Jarvis (GB), initially improved to position two. An electrical defect that required two pit stops, with the front hood and an electronic control unit being replaced, cost the squad several minutes four hours into the race. In the last hour, the team had to replace the front hood again after damage caused in a duel. In the final sprint, Oliver Jarvis slid into a gravel trap. “We showed a good pace and are taking that home as a positive from Spa,” said Loïc Duval. “Of course it’s a shame that we lost ground due to some issues. But I’m still optimistic that our run of bad luck is going to end at Le Mans.”

The driver trio of car number ‘9’ achieved a gratifying result. The hybrid race car contested the race with a different body version for higher aerodynamic downforce that had already been used at Silverstone. Audi used the race at Spa for a technical comparison of both concepts with respect to Le Mans and the other WEC rounds. Filipe Albuquerque (P) and Marco Bonanomi (I) and their team-mate René Rast (D) started the race from eighth place. The German debuted in Audi’s LMP1 race car and in Audi Sport Team Joest impressed with consistently good lap times. When car number ‘9’ lost its left-hand side window three hours into the race the team replaced the left door at the next pit stop. Despite this small repair job, the driver squad had improved to fourth place when the checkered flag fell. “Driving the Audi R18 e-tron quattro in a race for the first time was awesome,” Rast said. “We delivered a result that I’m very happy with. Now our next big task is coming up at Le Mans.”

“As in the season opener, the WEC again delivered super-thrilling racing,“ said Head of Audi Motorsport Dr. Wolfgang Ullrich in summing up the event. “I congratulate our winners and the whole team on this first-class achievement. They turned an endurance race into a sprint and did an impeccable job. A big thank you goes to the other two driver teams as well. I’m sorry that number ‘8’ was lacking that little bit of fortune that’s needed in a race. Our trio in ‘9’ ultimately complemented the result for Audi by a good position.”

In exactly four weeks from now, the track at Le Mans is on Audi Sport’s event calendar. At the official test day on May 31, the new Audi R18 e-tron quattro will have its first outing on the ‘Circuit des 24 Heures’ that is open only on the test day and during the race week. Two weeks after the test day, the 24-hour race as the pinnacle event of the FIA WEC season will be held there.

An extremely frustrating day for Ferrari at Spa-Francorchamps

Thriller in the Ardennes – second, third and sixth for Porsche 919 Hybrids