Ingolstadt - This is a change of historic proportions: The new regulations of the FIA World Endurance Championship (WEC) force the automobile manufacturers to use significantly less fuel than last year. The new rules will come into effect at the Silverstone (GB) season opener on April 20. Audi is tackling the challenge as the 2012 and 2013 World Champions with a newly designed R18 e-tron quattro and two strong driver lineups. Besides demonstrating their driving skills in the race they will also have to make their personal contribution to efficiency  not least due to the fact that, following an adjustment of the regulations on short notice, race cars with diesel engines like the R18 e-tron quattro are subject to another reduction of fuel-energy compared to competitors using gasoline engines.

Audi has been active in racing with fast sports prototypes since 1999, but the level of suspense this year is at an all-time high. Regulations that are new in every respect, two strong challengers  Porsche and Toyota  plus completely different LMP1 race car concepts by the three automobile manufacturers in the field fascinate fans and the professional community alike. The latest generation of the Audi R18 e-tron quattro diesel hybrid sports car boasts greater efficiency than ever before. For the first time, the regulations limit the available energy per lap, reducing consumption by up to 30 percent compared to last year. 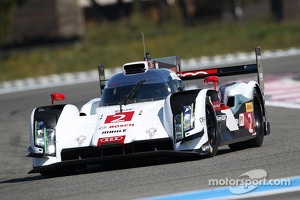 Audi began the new design of the World Championship winning R18 e-tron quattro sports car  which had been very efficient before  in summer of 2012. In March, Audi presented the diesel hybrid sports car sporting its final livery and graphics in a spectacular drive through the center of Le Mans. No race car from Audi has ever been as light as the current R18 and achieved such good lap times on such a small amount of fuel. Its e-tron-quattro drive combines a 4-liter TDI engine delivering more than 537 hp at the rear axle with a hybrid system with an output of more than 230 hp at the front axle. Audis consumption data and those of the competition are made available to the stewards of the meeting via telemetry in real time. Violations of the regulations result in penalties. All new procedures have to prove their worth in racing conditions for the first time in the season opener.

A new rating shortly before the season opener aggravates the situation. The final energy allocation list was only issued before the season opener. Audi now has less fuel available per lap, the permissible flow amount has been lowered, the fuel tank capacity reduced by 0.5 to 54.3 liters and the inlet cross-section for refueling has become smaller for the R18 e-tron quattro. At the same time, the parameters for the LMP1 teams using gasoline engines have been raised.

But this not only poses an additional challenge to the engineers and technicians this season. The drivers significantly influence consumption by their driving style as well. Audi relies on driver personalities who have demonstrated speed, talent and efficiency in 16 victorious WEC races to date, as well as in many other events resulting in great success. As World Champions, Loïc Duval (F) and the nine-time Le Mans winner Tom Kristensen (DK) will be running for the first time together with Lucas di Grassi (BR), who has contested WEC races for Audi on three previous occasions. Marcel Fässler (CH), André Lotterer (D) and Benoît Tréluyer (F)  the 2012 World Champions  will be starting from the grid in car number 2. Both teams have been registered for the entire 2014 WEC season.

The first competition between the three automobile manufacturers in the LMP1 class will be held at the historic Silverstone venue and in an important market. In the past two years, Audi won the race on the 5.891-kilometer circuit that used to be an airfield. The track with its long straights  the third-fastest one on the calendar after Le Mans (F) and Spa (B)  will be the first test bed for efficient driving. In addition to the first World Championship points to be scored, a valuable trophy will be a special reward in this race: Like last year, the winners of this WEC round will be presented with the famous Tourist Trophy  one of the most tradition-steeped prizes in racing.

In the United Kingdom, Audi enjoys a high level of visibility not only due to its racing commitment, as last year the brand with the four rings delivered 14.9 percent more automobiles there than the year before. In Europe, with 142,039 units sold, Great Britain trailed Germany as the second-largest sales market of AUDI AG.

Topics of the weekend

-How balanced will the performance of the three manufacturers in the LMP1 category be?


-How will the new regulations affect the course of the race?


-Who has built the most efficient race car?


-Will Audi manage to clinch its third Silverstone victory in succession?

Quotes by the officials...

Dr. Wolfgang Ullrich (Head of Audi Motorsport): The new season shows that this World Championship with three manufacturers in the LMP1 class and the large number of other teams in the field is heading in the right direction. Getting this series off the ground was a challenge. Now were feeling real momentum. Ill be very happy when the season starts at Silverstone. Its been a very intensive winter due to the new regulations. The current adjustments to the regulations make the situation particularly difficult for us.

Chris Reinke (Head of LMP): Were at the beginning of a new era. Its a new era because of the technical challenges posed by the new race cars on the one hand and the strong competition on the other. Were meeting with two rivals that must be taken very seriously. This raises the level of the competition which were happy to take on. Our aim is to start the new season with a victory.

Ralf Jüttner (Technical Director Audi Sport Team Joest):The spectators can look forward to a great season opener. Following their assembly in Ingolstadt, our cars have completed all the roll-outs and functional tests and were also on track in the WEC Prologue at Le Castellet, where they met with our previous challenger Toyota and, for the first time, with Porsche. The way the new regulations have been designed will result in a very close range of the times set by all the manufacturers. The regulations now coming into effect are new for all of us. This will be very exciting.

Facts and quotes by the Audi drivers...


Silverstone will be a very special race for the whole WEC, for Audi and for me. Im at the beginning of my first full WEC season. Now, the most efficient car and the most efficient drivers will have an advantage. New rules and new challengers mean that things will be even more difficult. I regard myself as a rookie in this squad and want to learn as much as possible from Loïc Duval and Tom Kristensen.


-Won a year ago in England, on running for the first time with his (then) new team-mates
-Is starting the 2014 season with Tom Kristensen as World Champions


Our World Championship starts on a historic track. Many fans will remember the great head-to-head race between Benoît Tréluyer and Allan McNish in the final stage a year ago. For me, it was the first success with Tom Kristensen and Allan McNish. Like last year, well have the chance to win the Tourist Trophy there, one of the most tradition-steeped prizes in racing.


Im very much looking forward to our first race. The clocks have been reset to zero. Its the first year under completely new conditions. Three manufacturers in the top category mean that the competition will become even more thrilling. Silverstone is a perfect venue for the season opener.


-Is starting his fifth joint season with André Lotterer and Benoît Tréluyer
-In 2012, the trio clinched the first WEC World Champions title


Im dying for the season opener to start because the winter, with all the tests, was very long. Now were finally driving for points. The track in England with its challenging layout is exactly what you wish for as a race driver. A year ago, we had a wonderful battle for victory with our sister car there. Its time for the season to start.


Itll be a highlight when the three brands meet in the LMP1 class at Silverstone. I can hardly wait for it. Thats when the sporting part of the season starts after all the tests and developments. Following the narrow result last year, it would be great if we could win at Silverstone this time.


A year ago, we saw a nice race at Silverstone and fought a great battle with our team-mate Allan McNish. Now, with the new regulations and a third manufacturer, things will become even more interesting, especially on a classic race track that we love as drivers.