Aston Martin Racing happy about the result in Japan and look forward to last two rounds at Shanghai and Bahrain.

Fuji, 20 October 2013 - Aston Martin Racing has won both GTE classes of the FIA World Endurance Championship (WEC) Six Hours of Fuji, Japan, with its Gulf-liveried #97 and #95 Vantage GTEs, and has taken second place in the GTE Am class with its #96, in a race that was marred by terrible weather conditions.

The race started at 1100hrs local time and, due to the torrential rain that had fallen throughout the night and morning, the safety car led the competitors out onto the Fuji International Speedway, with the intention of completing three laps. However, after eight laps it was still deployed and the race director made the decision to put halt to the race.

The clock continued running and the rain continued falling, until 1330hrs when the race director restarted the six-hour race and set the clock to 4 hours 10 minutes, so that drivers could all complete their necessary time in the car for full points to be awarded. Although the fog lifted, the rain didn’t and after another eight laps behind the safety car, the race was red flagged once more. 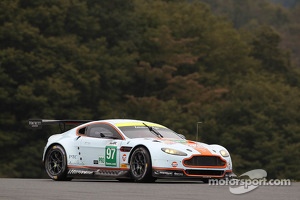 Despite a second restart attempt, and with 3 hours 16 minutes remaining on the clock, the race was stopped, leaving the #97 Vantage GTE of Fred Makowiecki (FR), Darren Turner (GB) and Stefan Mücke (DE) with the GTE Pro race win and the #95 Vantage GTE of Bruno Senna (BR), Christoffer Nygaard (DN) and Kristian Poulsen (DN) finishing in first place in the GTE Am class, the positions in which they had qualified.

“I’m really sorry for the Japanese fans,” comments Makowiecki, who drove the #97 car. “We will go away with our points, which are really important for the championship, but it is a shame not to race properly.”

In accordance with the WEC regulations, half points will be awarded to each of the teams, as less than 70 per cent of the race was completed. In addition, all drivers within a team will be awarded points regardless of whether they drove today or not. Senna, who drove the #95 car today, was pleased to add to the team’s growing points tally.

“Yes, the conditions were very difficult but the race directors were ‘on it’ and they need to be congratulated for the safety decisions made today,” he commented. “With one mistake out there everyone would have been in trouble. Of course, I’m sorry for the fans – they were really out in force, despite the weather. However, we have to remember that racing is not only about emotion but about safety too.

“For the team it’s good to score points. It’s been great to come into the #95 car and help them get pole position yesterday, which has essentially enabled them to get these points today.”

The #96 Vantage GTE of British trio Stuart Hall, Jamie Campbell-Walter and Jonny Adam finished in second in the GTE Am class and the #99 of Pedro Lamy (PT) and Richie Stanaway (NZ) finished in sixth in the GTE Pro class because of a spin that put them to the back of the grid.

John Gaw, team principal of Aston Martin Racing concludes: “Racing sometimes throws up surprises and today was one of them. The weather was truly against us and torrential rain led to a flooded circuit. The event organisers did the right thing to ensure the safety of all the competitors, even if it was disappointing for the spectators.

“The terrific performance we had in qualifying yesterday has ensured that we scored the maximum points we could this weekend and has extended our lead in the GTE Am drivers’ and teams’ championship. It’s also moved us to just a few points off the overall lead of the manufacturers championship while at the same time closing the gap between us and the leaders of the GTE Pro teams’ and drivers’ tables.

“We are very happy about this and look forward to last two rounds at Shanghai and Bahrain, which we know from last year were the two strongest circuits for the Vantage GTE. Winning the titles for Aston Martin is our sole focus.”