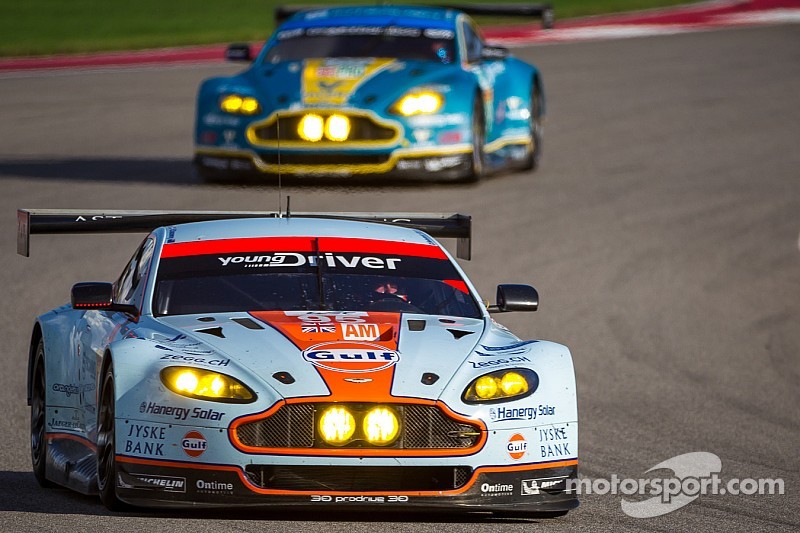 Shanghai - Aston Martin Racing has won the GTE Am class of the FIA World Endurance Championship (WEC) Six Hours of Shanghai in its #98 V8 Vantage GTE. With the #95 sister-car finishing in second place, it has also ensured that one of its two GTE Am entries will take the 2014 GTE Am Teams Trophy and one or more of its drivers will take the GTE Am Drivers Trophy.

Although it was the #98 NorthWest car that crossed the line in first place at the Shanghai International Circuit, the pair of Aston Martin Vantage GTEs once again proved how evenly matched they are by closely but safely battling for the lead throughout the six-hour race.

The NorthWest-sponsored team of Christoffer Nygaard (DN), Pedro Lamy (PT) and Paul Dalla Lana (CA) qualified on pole and, other than trading places with their #95 team-mates, they led the race to the chequered flag.

To have clinched the GTE Am Teams and Drivers Trophies with two rounds remaining is great news,

”That was a great race,” commented Nygaard. “We qualified on pole for the second event in a row and were in the lead for most of the race. Paul and Pedro both did a great job today and we’re looking forward to going to Bahrain and hopefully closing the championship lead on the #95 car.”

Despite leading the class at one point, the #95 Vantage GTE – driven by Richie Stanaway (NZ), Kristian Poulsen (DN) and David Heinemeier Hansson – had to settle for second place and, although the #98 has closed the gap on the championship lead, it is the #95 Young Driver AMR car that goes into the penultimate round of the 2014 at the top of the championship standings.

With just two races remaining, today’s result puts all other teams out of the running for the 2014 GTE Am Teams Trophy, leaving it a two-way battle between the Aston Martins.

“It’s great to be leading the championship but the #98 team are giving us a good battle,” commented Heinemeier Hansson, who is currently leading the GTE Am Drivers Trophy, alongside Poulsen. “Either way, an Aston Martin and an Aston Martin Racing works driver has won the GTE Am championship, which is fantastic for the team, but we are going to do whatever we can to make sure it is us!”

In the GTE Pro class, the #99 Craft-Bamboo Vantage GTE had a clean and solid race and finished in fourth place but luck was not on the side of the #97 Vantage GTE which, despite qualifying on pole and leading the race from the green flag, was forced to retire with an engine issue in the fifth hour of the race.

“To have clinched the GTE Am Teams and Drivers Trophies with two rounds remaining is great news,” commented Team Principal John Gaw. “It’s a two-horse-race to the end now and, although the #95 is in the lead, the #98 is hot on its heels.

“Obviously, it’s disappointing that the #97 GTE Pro car had to retire. It qualified on pole and led for the whole race and we are confident that without the issue we would have taken our third race-win here in three years. Still, we head to Bahrain in a couple of weeks with the same focus and determination and as positive as ever.”

The FIA WEC continues with the penultimate round in Bahrain on the 15/16 November.

Audi scores 22 points in battle for WEC title in China