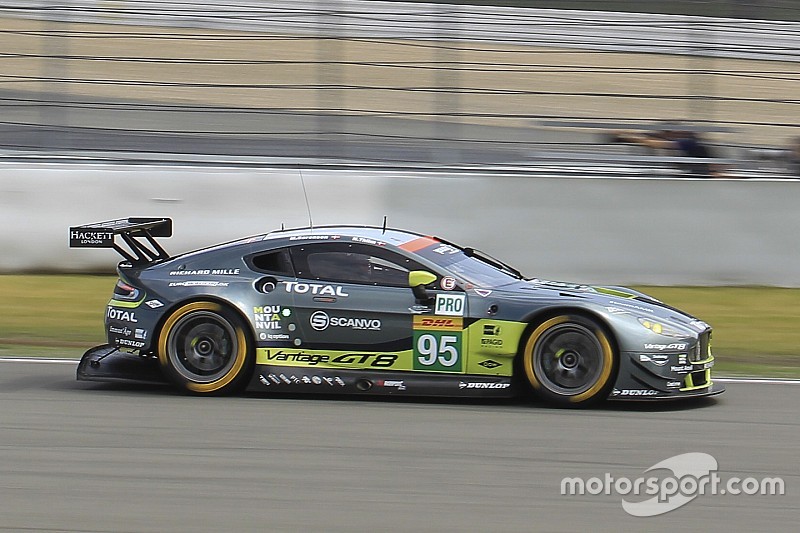 #98 GTE Am entry victorious in Germany

Aston Martin Racing has achieved double podium success at the 6 Hours of Nürburgring, taking victory in the GTE Am class and 3rd in GTE Pro.

With conditions remaining dry throughout the fourth round of the FIA World Endurance Championship (WEC), the trio of Paul Dalla Lana (C), Pedro Lamy (P) and Mathias Lauda (A) drove a faultless race to bring their V8 Vantage GTE home in 1st.

Following a strong stint from Lauda which saw him claim both 2nd and 1st positions on track, the team ensured an unbroken lead for the final 3 hours of the race.

Lauda said following the race, “That was great. This is our second win this year already and three podiums too. We had a perfect race, the crew did a superb job, our strategy was always good and we pitted at the right time. Paul, Pedro and I did really good stints with no issues and I really feel that we deserved to win”.

Dalla Lana added, “This is a fantastic day. Anytime you can win in this championship it’s a special thing. It’s such a tough competition and it’s really good to be back on the top step. This is a little bit of redemption after Le Mans but this is the best way to come back from that”.

The result brings vital points for the teams GTE Am title challenge, before the WEC leaves Europe for the 6 Hours of Mexico.

In GTE Pro, the team enjoyed a strong points haul for its #95 V8 Vantage GTE entry with 3rd place. Despite Nicki Thiim (DN) and Marco Sørensen (DN) displaying a strong performance, a late full course yellow soon after their final pitstop allowed others to benefit from the slower track, dropping the crew to 3rd by the finish.

Thiim said following the ongoing battle, “That was a tough race but a fantastic one for the spectators. It was an amazing battle throughout the whole six hours and the balance was really great with the Fords and Ferraris all the way through. It’s so much fun just to go out there and give it all you’ve got and to keep pushing. In the end we were unlucky not to get the second position but that’s racing.”

Sørensen added, “We did what we could and the team did an amazing job yet again. The pit stops were perfect but we were just a little bit unlucky not to take another step up on the podium. We’re hoping that the next tracks will suit our car a little better and we can take a victory soon”.

The #97 GTE Pro entry of Darren Turner (GB) and Richie Stanaway (NZ) finished the race in 5th place.
Paul Howarth, Team Principal Aston Martin Racing added, “A double podium weekend for the team, winning in Am and taking third place with #95 is great. The first four and a half hours were the closest GT racing we’ve seen this year, which is really great for the series. We feel very confident following yesterday’s pole positions and today’s results. We’re now looking forward to taking the championship fight to Mexico, which is going to offer all sorts of new challenges, but I’m really proud of the team’s performance today”.

Speaking on #98's GTE Am win, Howarth added, “Our Am car executed an excellent strategy. Between the three drivers they maximised their opportunities on the track and kept consistent pace throughout the six hours to give them this victory. The whole team was really focussed on fighting from the beginning and Mat’s committed stint moved us into a strong position once the field had settled down after the first two pitstops. This was the performance they needed and result they deserved”.

The FIA World Endurance Championship will return on 3rd September for the 6 Hours of Mexico following the summer break.

Webber: Audi “ran out of bullets” in duel with Porsche