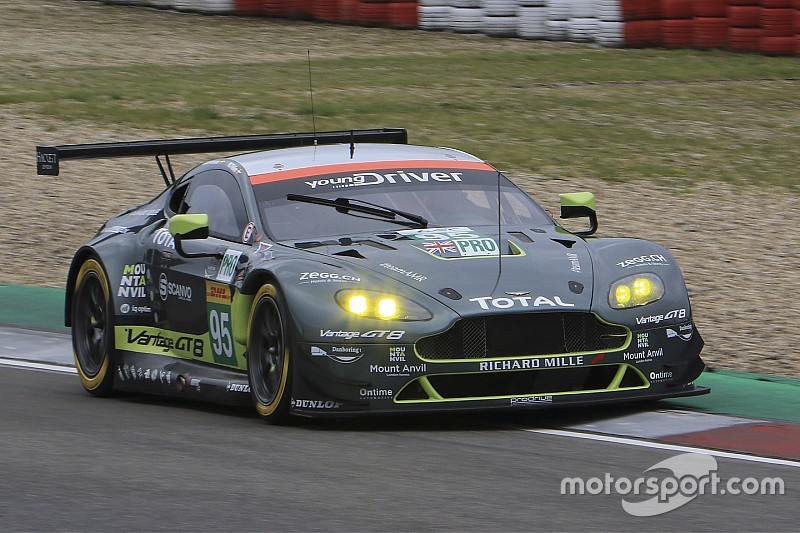 Nürburgring – Aston Martin Racing has claimed pole position for tomorrow’s 6 Hours of Nürburgring, the fourth round of the FIA World Endurance Championship.

With the session taking place on a drying track, the lap times soon tumbled as the #95 V8 Vantage GTE of Nicki Thiim (DN) and Marco Sørensen (DN) claimed pole. After both completed flying laps on the intermediate Dunlop tyre, the team opted to run on slicks as track conditions improved with Thiim at the wheel.

Thiim said, “I’m mega happy! The guys really deserve it and all of our partners worked really hard to finally put everything together! It was a tough one with the typical Nürburgring weather but it all came good. We made the right calls on the strategy and Marco did a stunning job out there. It was quite tricky on slicks but I was able to put in a really good lap. I know it’s a long race but it’s a big step for us to be able to grab pole ”.

Sørensen added, “Nicki did an amazing job with the intermediate tyre at the beginning of the session. Those tyres are a real boost for us. When the track was a little bit drier, I was able to jump in for my stint and improved the time a little bit. On my final lap, I was called in late so that we could put on the slick tyres. It was definitely the right call and Nicki went out and put in a really perfect lap to get pole for us”.

#97 entry takes 3rd for German round of FIA WEC

The team ran a similar strategy with the #97 entry of Darren Turner (GB) and Richie Stanaway (NZ). With both also completing their initial laps on intermediates, Stanaway returned to the track for a second stint in the slick-shod V8 Vantage GTE, claiming 3rd position for tomorrow’s race.

Turner said, “When you’ve got a drying track it’s a pretty difficult call for all the teams to make. All of the guys who went out first, including Richie, knew the track was going to get better, so it was really just a banker lap. That was my first lap on the inters this weekend so my stint was a little exploratory for me. I needed to push but not make a mistake but we were happy with the pace we were able to achieve. #95 being on pole is a fantastic result and we’re in a great position in 3rd too”.

The GTE Am entry of Paul Dalla Lana (C), Pedro Lamy (P) and Mathias Lauda (A) will also begin tomorrow’s race from 3rd.

Paul Howarth, Team Principal Aston Martin Racing said, “That was an unbelievable team effort. Up until this point in the weekend, the Nürburgring has thrown every challenge that it can throw at us when it comes to the weather and track conditions. Our ever closer working relationship with Dunlop has enabled us to be able to challenge for the top honours in GTE. We’re immensely proud of the #95 crew and the #97 came very close to achieving a 1-2. The whole team delivered a performance that Aston Martin and our partners can be proud of. We must now move on to the race and our target is to continue to achieve top results“.

Ford GT to start ‘6 Hours of Nürburgring’ on front row