Aston Martin Racing will announce its 2014 works team programme in the early part of next year.

Bahrain - Aston Martin Racing has finished second in the 2013 FIA World Endurance Championship (WEC) after an eventful final round of the series, the Six Hours of Bahrain, which saw the British racing team cruelly denied the manufacturers’ world championship title in the final hour. 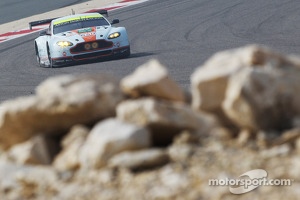 After an intense, season-long battle with Ferrari and Porsche, the team went into the final round leading the LMGTE Manufacturers’ World Cup. Luck, however, was not on the side of the team and, after 109 laps of the International Circuit of Bahrain, the #97 Vantage GTE was forced to retire leaving the #99 and #95 Vantage GTEs to battle on to try and score enough points.

“We had a problem with the engine,” comments Darren Turner (GB), who shared the #97 machine with Stefan Mucke (DE). “It’s such a rare issue and it’s incredibly disappointing – I feel a bit like we were robbed of the Trophy for GTE Pro Drivers. It wasn’t the end we hoped for but we took it to the wire and gave it our best shot and the rest of the team continued on in the spirit that has carried us through this year.”

With little more than an hour to go, the #99 of Bruno Senna (BR), Pedro Lamy (PT) and Richie Stanaway (NZ) was in a comfortable third and in line to take 15 points. The #95 was leading the GTE Am class and seventh overall, now contributing a vital six manufacturer points for the team, still enough for it to take the most coveted title in international GT racing.

However, disaster struck when Lamy was forced to bring the #99 into the garage with an engine issue, ending the hopes of the Aston Martin Racing team and its fans in the Manufacturers' title race.

Still upholding team honours, though, was the #95 Vantage GTE which took the chequered flag in the GTE Am class by a comfortable margin to give the all-Danish trio of Christoffer Nygaard, Kristian Poulsen and Nicki Thiim their third win of the year.

“We are really happy to convert a pole into a win,” comments Nygaard. “All year, the pace was there but so many small problems that were out of our hands stopped us from winning. It really came together today but I didn’t believe we were going to win until we crossed the line!”

“Yes, it was a near perfect first race,” adds Thiim. “We struggled with our tyres in the first stint as the conditions were so hot but we managed them well, which is testament to how good the car is. As the sun went down the temperatures cooled and we showed strong pace and we all did a great job to control the gap. The whole team did a great job.”

Further consolation for the team came as the #96 Vantage GTE celebrated championship success, with British drivers Jamie Campbell-Walter and Stuart Hall clinching the Trophy for GTE Am Drivers, ably supported by Roald Goethe who returned to share the driving duties for the season finale.

“It’s a dream come true,” comments Campbell-Walter. “I have three thank you messages; the first is for Stuart for being a fantastic team-mate all year, the second is for Roald, without him we wouldn’t be here at all and the third is for the team at Aston Martin Racing.”

“It looked like we weren’t going to do it but I always say that as long as you are in the race you can win it and we have proved that this year,” adds Hall.

John Gaw, Team Principal comments: “Engine failure is so rare, so for it to happen to us twice in one race is of course highly unusual. We came here at the end of an incredibly strong year and, thanks to fantastic work by all of the team, we were leading the championship. We did everything within our control to leave here champions and we can all be very proud. The outcome was not what we wanted on the day and unfortunately it wasn’t meant to be in GTE Pro.

"However, everyone at Aston Martin Racing is so proud of the #96 crew for winning the Trophy for GTE Am Drivers and it was fitting that the #95 car finished the season on a high with its third race win of the season.”