On its first visit, the ORECA 03, powered by a Nissan V8 conquered the Circuit of the Americas – taking a 1-2 finish thanks to the pair of teams running the car.

The ORECA chassis’s total victory count in LM P2 for 2013 is now seven. After three wins in the European Le Mans Series, a fourth victory in the FIA World Endurance Championship was notched on Sunday in the United States. On its first visit, the ORECA 03, powered by a Nissan V8 prepared by ORECA’s engine department, conquered the Circuit of the Americas – taking a 1-2 finish thanks to the pair of teams running the car. 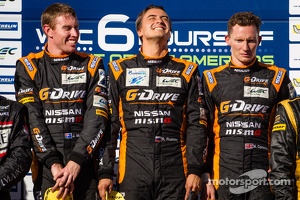 Winners at Sao Paulo, G-Drive Racing by Delta-ADR headed to the top step of the podium after starting from pole position and a remarkable race from drivers John Martin, Roman Rusinov and Mike Conway. Pecom Racing, with a trio composed of Pierre Kaffer, Nicolas Minassian and Luis Perez Companc, took another podium finish.

The Argentinian team is more than ever in the hunt for the championship title since they are now leading the classification ! The second ORECA 03 entered by G-Drive Racing by Delta-ADR driven by James Walker, Tor Graves and Rudy Junco Jr., finished in fourth place.

"Bravo to G-Drive Racing by Delta-ADR and Pecom Racing ! » exclaimed Hugues de Chaunac, president of the ORECA Group. « Like the other competitors, these two teams discovered the Circuit of the Americas this weekend and, right from the start of the first practice session, they showed speed on a track that is not easy to learn.

G-Drive by Delta-ADR once again had a superb weekend, with a pole and victory. The start of the race was not easy, but Simon Dowson’s team perfectly managed the situation. Pecom Racing were very strong and never gave anything up. That determination paid off and the team now takes the lead in the LM P2 standings by a few points. The last three rounds of the championship will be very exciting !

It’s always special for ORECA to race in the USA. The event was made even more important, with the ALMS and FIA-WEC sharing the weekend and I’m very happy to see the ORECA 03 win here. It’s a good victory for us, including our engine department."

From pole position, the No.26 G-Drive Racing by Delta-ADR ORECA 03, keeps the lead at the start while the sister car is in fifth behind Pecom Racing. The race is neutralised on the first lap after the No.31 Lotus stops on at the first corner. Fifteen minutes later, the race continues and although the running order remains unchanged, the gaps are now much closer : the top four cars racing within three seconds of each other.

After the first round of pitstops, the leading No.26 ORECA 03 gives up the lead and rejoins the action in fourth place, just behind Pecom Racing. After passing Nicolas Minassian, who is running a different strategy, John Martin catches up to the Morgans. He finishes his stint only a few seconds behind the leaders, handing the car to teammate Roman Rusinov who enters the fray in first after the pitstop rotation !

The Russian driver widens the gap…when the two Morgans collide. This allows the Pecom Racing ORECA 03 to take over second place at the halfway point of the race. Then running in third position for most of the fourth hour, the Argentinian team benefits from a competitor’s mechanical misfortunes to regain second place.

With Mike Conway now behind the wheel, the No.26 ORECA 03 enters the last third of the race and finishes without issues, taking the checkered flag with more than a minute advance on the No.49 Pecom Racing entry and three laps on the sister G-Drive Racing by Delta-ADR entry. Fighting for the podium, the No.25 is forced to accept fourth place after a spin in the last hour of the race.

After six hours of a well-managed race, both in performance and in strategy, G-Drive Racing by Delta-ADR take home a second consecutive victory with Martin/Rusinov/Conway. Finishing second, Pecom Racing garners a fourth podium in five rounds with Kaffer/Minassian/Perez Companc and take the lead in the teams classification by three points.