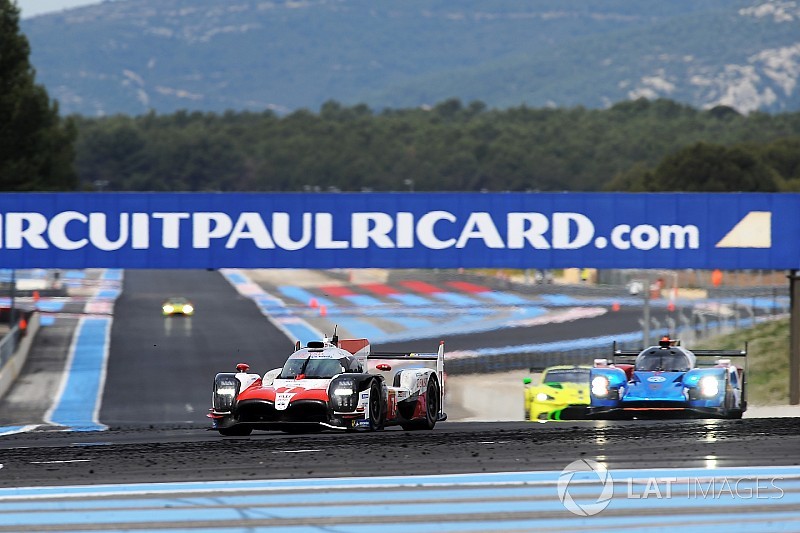 SMP Racing's Mikhail Aleshin has likened Toyota's advantage in the FIA World Endurance Championship's LMP1 class to that of a Formula 1 team allowed to run a "V12 twin-turbo" engine.

Aleshin's SMP stablemate Vitaly Petrov set the best time for a non-hybrid car in WEC's Prologue test at Paul Ricard, but was 4.372s off the benchmark established by Toyota, although the TS050 Hybrids ran outside of the championship's Equivalence of Technology rules to set their best times.

WEC organisers have sought laptime parity between Toyota and its privateer opponents this season, but the Japanese manufacturer has been promised a fuel economy advantage equivalent to a lap at the Le Mans 24 Hours.

It has also been stated that non-hybrids that prove faster than the TS050 Hybrids are liable to be penalised as this would imply a distortion of the EoT.

Amid suggestions that Toyota deserves an advantage over its rivals for its loyalty to the WEC, former IndyCar racer Aleshin said he felt the situation in the LMP1 class made little sense for all concerned.

He told Motorsport.com: "Can you imagine if one team in F1 is allowed to have a V12 twin-turbo engine without any [limit on] number of engines to use in a year? What’s going to be the result?

"Even if it’s Ferrari, which has been there forever, you ask the people who are driving 1.6-litre [engines] what they think about it. It’s the same.

"I understand [Toyota's] situation, but I just think we all want to deserve our results. I don’t think they want to win races by three laps, because for them it’s also not interesting.

"It’s not interesting for us, and it’s not good for the show. So I think we are in the same boat; we just need to figure out how to work together."

Aleshin and Petrov will contest the Spa WEC opener next month as a duo, with the third driver for SMP's #11 BR1-AER at the Le Mans 24 Hours still to be determined.

'There are still two classes'

ByKolles driver Oliver Webb said the gap to the Toyotas at Paul Ricard came as no surprise, and that the non-hybrids will be fighting for third in Spa unless one of the two TS050 Hybrids hits trouble.

The Briton, who will race alongside Dominik Kraimamer and Tom Dillmann in the ENSO CLM P1/01-Nissan for Spa and Le Mans, feels that Toyota effectively remains in its own subclass.

"When you’re three or four seconds [a lap] off, it would be silly to think it’s realistic to fight for first in a six-hour race," Webb told Motorsport.com.

"We’ll always fight until the last lap, and if they have a misfortune, we’ll take advantage, but there’s still a privateer and factory class, even though it’s not written down.

"It sucks a little bit because you want to fight. It would be nice to have a privateer category still, but I guess that wouldn’t happen because Toyota would be by themselves."