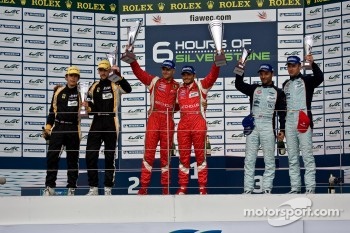 With quality not necessarily being synonymous with quantity, the LMGTE Pro class is often one of the most exciting despite a reduced number of entrants compared to other categories. The 6 Hours of Sao Paulo was no exception to the rule: the No.51 Ferrari 458 Italia of AF Corse lifted its third trophy in three races following success at the 24 Hours of Le Mans and the 6 Hours of Silverstone, but the No.97 Aston Martin Racing Vantage V8 made life difficult for them.

Darren Turner claimed pole position for the British constructor yesterday, but it was his team mate Stefan Mucke who took the start of the race. He quickly lost two places to Gianmaria Bruni in the No.51 AF Corse Ferrari and to Marc Lieb in the No.77 Team Felbermayr-Proton Porsche. The latter quickly lost ground leaving only the Ferrari and the Aston to fight it out, Giancarlo Fisichella doing his stint in the Ferrari at the same time as Darren Turner in the Aston Martin. The Italian drivers finally got the better of the Anglo-German duo and one lap separated them at the finish.

The battle in the LMGTE Am class was, on the other hand, a short one. The No.88 Team Felbermayr-Proton Porsche, in the hands of Paolo Ruberti, Gianluca Roda and Christian Ried, got caught up in the skirts of the No.50 Larbre Competition Corvette during the first hour but, thereafter, the gap between them got bigger and bigger. Patrick Bornhauser, Julien Canal and the Brazilian Fernando Rees went through to the finish without having any further problems or scares. However the post technical checks revealed a problem with the Corvette and the LMGTE winning car was excluded from the results (stewards decision nr25). The No. 88 Team Felbermayr-Proton Porsche was promoted to first place, while the second Larbre Compétition Corvette, the No.70 driven by Jean-Philippe Belloc, Christophe Bourret and Pascal Gibon was classified in second and the all Brazilian AF Corse-Waltrip Ferrari in third. Larbre Competition have appealed the Stewards Decision and therefore the result and championship positions remain provisional.

It’s now off to the Middle East for competitors for the next round at Bahrain in two weeks on 29th September. The race will run partly at night and will once again be for six hours.

Giancarlo Fisichella nr51 AF Corse Ferrari 458 Italia “It’s a great circuit, I scored many podiums here in Formula One and I won my first race in F1 here in 2003. I couldn’t stand on the top step of the podium due to a mistake by a marshal, but one week later they gave me back my victory. Today I could stand on the top step at Interlagos. It was a tough race but our pace was good enough to keep the Aston Martin behind us. A great job from the AF Corse team and from Gianmaria. The first stint we had some degradation from the tyres, but my second stint was very good and I was able to pull away from the Aston Martin.”

Gianmaria Bruni nr51 AF Corse Ferrari 458 Italia “I have to be honest the Aston Martin was very close to us with the fuel consumption, it was only one or two laps in the first and second stints, so we weren’t sure if they were doing an extra pitstop. In fact they did a pitstop with four laps to go. GT is a great fight, unfortunately there are only a few cars but all good, very competitive, with great drivers and great teams. I’m so happy now because on Friday I was thinking we couldn’t win this race, Aston and Porsche were unbelievably fast in a straight line. I thought it would be impossible to pass, but luckily everything went well for us.