Congratulations on the early win of the FIA World Endurance Championship. Now you can be relaxed when you travel to the finale. Allan McNish, Loïc Duval and I decided the title in our favor one race before the end of the season. 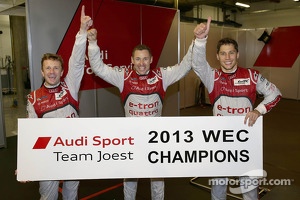 That shows how strong our season has been up to now because we were on the podium in each race. The team, the mechanics and the engineers have done a first-class job.

What importance has endurance racing acquired by now? In my opinion, a world championship for sports cars should have existed for a lot longer. Its very important for technology development, which is a decisive reason for the automobile manufacturers commitments. Experiencing such a title with Audi is especially nice.

At Le Mans, the number of points awarded was doubled. Was the victory in the 24-hour race the key to the World Championship title? There was a very large number of points awarded at Le Mans, and the victory was a particularly hard-fought one. But I feel that our success at Austin was another very important milestone in the battle for the title. The World Championship title marks the crowning of our success.

How do you assess the WEC race at Shanghai in which you won the title together with your team-mates? Cleverness was crucial today. Thats exactly what Audi achieved with both cars by delivering a very good tactical performance  a hard-fought victory and the World Championship title. With our driver squad in car number 2 we took a conservative approach to the race. Precisely that approach paid off. Today we showed a nice sporting team performance in Audi Sport Team Joest.

6 Hours of Shanghai: A new victory for the ORECA 03 LM P2 and G-Drive Racing !