A crucial double podium finish for OAK Racing in the Shanghai 6 Hours!

OAK Racing was on a double mission when the three prototype Morgan-Nissan LM P2s shod with Dunlop tyres took up their places on the grid.

The Shanghai 6 Hours was the theatre of a no-holds-barred battle in LM P2. Olivier Pla, Alex Brundle and David Heinemeier Hansson in the no. 24 Morgan-Nissan LM P2 finished second in the category and sixth overall. Bertrand Baguette, Martin Plowman and Ricardo Gonzalez in no. 35 rounded out the top 3, while Keiko Ihara, David Cheng and Jacques Nicolet came home sixth in P2. With one race to go OAK Racing has consolidated its place as leader in the LM P2 Drivers’ and Teams’ World Championships! 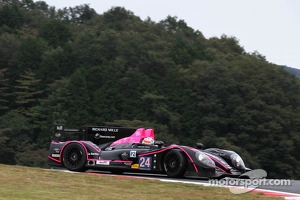 A big crowd flocked to the grandstands on the Shanghai circuit and saw a thrilling 6-hour race. OAK Racing was on a double mission when the three prototype Morgan-Nissan LM P2s shod with Dunlop tyres took up their places on the grid.

The first was to do everything possible to win the Chinese round of the FIA World Endurance Championship, and the second was to consolidate the team’s positions in both the drivers’ and teams’ championships. Olivier Pla was given the job of doing the first stint in no. 24, which started in second place on the grid. Bertrand Baguette was entrusted with the same task in no. 35 in fourth spot, while Chinese driver David Cheng was in no. 45 in the colours of the Costa Art Car and Total Lubricants China.

While the OAK Racing drivers made a low-key start to the race, they all upped the pace on a consistent basis as they reeled off the laps.

Pla and Baguette both did double stints, and Cheng handed over to Keiko Ihara after a quick first run. The Frenchman and the Belgian had fought their way up to second and third when they were relayed by their team-mates, Alex Brundle and Martin Plowman. At almost exactly the same moment Jacques Nicolet jumped into no. 45.

The race pattern was now established. No. 24 began a thrilling battle with the G-Drive Racing car. No. 35 was lying third with the prospect of pulling off a good coup in the championship after one of its main rivals for the title, Pecom Racing, ran into technical problems.

At half-distance the no. 24 Morgan-Nissan LM P2 was in the lead, and it swapped first place with G-Drive Racing as refuelling stops intervened. After a very good double stint by Brundle, Dane David Heinemeier Hansson did everything expected of him like Ricardo Gonzalez in no. 35. In sixth place Ihara-Cheng-Nicolet were also driving a steady, consistent race despite having to change the bonnet for safety reasons and suffering a puncture.

In the closing stages of the race Pla and Baguette got back in the nos 24 and 35 Morgan-Nissan LM P2s for the last two decisive stints. After a nail-biting end to the race no. 24 crossed the finishing line in second place only some 30 seconds behind the winners. No. 35 finished third and Ihara-Cheng-Nicolet saw the flag in sixth spot.

This very good overall result for OAK Racing and its Morgan-Nissan LM P2s built and developed by its constructors’ department, Onroak Automotive, has helped the French team to consolidate its position as leader in the LM P2 World Championship for Teams as its cars now fill first and second places. In the drivers’ classification Baguette, Plowman and Gonzalez have a 13-point lead over Pla-Brundle-Heinemeier Hansson who moved up into second today. The outcome will be decided in the last round in Bahrain on 30th November.

Sébastien Philippe, Team principal: “Today, we were not in a position to beat G-Drive Racing, but second and third is a good overall performance, all the more so as it’s a great result in view of the drivers’ and teams’ championships. We’re now in a situation where all we have to do in Bahrain is to finish the race to clinch them both. No. 24’s result means it will also be in with a chance so we’ve doubled the odds in our favour! But it’s not over yet! No. 45 had a good race. David Cheng, who joined us for his home event, set good times and Jacques Nicolet and Keiko Ihara backed him up in style!”

Alex Brundle, no. 24 Morgan-Nissan LM P2: “Taking into account our speed in free practice you could say that we put on a good performance today. We’re very pleased with our second place, which has helped us make a big step forward in the championship as our main rivals didn’t score all that many points. David and Olivier were fantastic and we did everything we could to win the race, but we just lacked that little bit extra. Nonetheless, everybody did a great job today in China.”

Bertrand Baguette no. 35 Morgan-Nissan LM P2: “It was a tough race. I was surprised by the lack of grip at the rear end at the start and I remained glued to the track. Then things were tricky in the traffic, but we were able to fight our way back up the time sheets without taking risks. Finally, we finished third and it’s a good operation in view of the championship. We’ve only got one race left and we’ve got to bring the title home!”

Keiko Ihara no. 45 Morgan-Nissan LM P2: ”I’m very happy with sixth place. After what happened at Fuji you could say that it’s my second race with OAK Racing. We finished fifth in Brazil and sixth here so I’m very pleased. I think that I can now say that I understand how the Morgan-Nissan LM P2 works. On this circuit’s fast corners I realised just how good the car is as I was able to go through them quicker and quicker! I think that we can do even better next time out in Bahrain.”

Strong performance by Greaves Motorsport in 6 Hours of Shanghai