The only American team to contest the WEC. 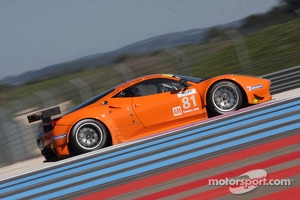 After winning two races in 2013 and claiming the GTE-Am class championship, Team CEO and Driver Enzo Potolicchio has set its goals in having a better performance in the prestigious 24 hours of Le Mans and repeating the title accomplished in 2013.

“Not many drivers have had the opportunity to win the World Championship two years in a row,” said Enzo Potolicchio. “The goal of repeating the victory achieved in 2012 at the 24 hours of Le Mans, was cut short by a punctured tire after we were having a great weekend. For 2014, we have set our eyes on winning the 24 hours of Le Mans and repeating the team’s championship.”

In 2014, the 2012 FIA WEC Rookie of the Year, Enzo Potolicchio, will be joined by new co-drivers Paolo Ruberti and Gianluca Roda, who will be looking for the drivers’ championship that came up short by only one point in 2013. Ruberti and Roda, who have vast experience in the World Endurance Championship, will give us the edge in our pursuit for victory in the 24 hours of Le Mans and the drivers’ championship.

“I am very excited to join 8Star Motorsport,” Ruberti said. “Our goal is to win the championship. We know it is going to be a hard task but we have an excellent car, team and we are very competitive. ”

“I am very happy to join Enzo and Paolo, and I am sure this is a decision I will not regret as they are excellent drivers and persons overall,” said Roda empahatically. “I am sure we are going to have a great season and all of the guys are very happy to get this season started with the #90 Ferrari.”

The 2014 season shows an 8 event calendar, with races to be held in the United Kingdom, Belgium, France, USA, Japan, China, Bahrain and Brazil. 8Star’s unfinished business in 2013, will be the push for this 2014 season.