The 6 Hours of Silverstone will be the first real FIA WEC test of the year before the 24 Hours of Le Mans in June, and the hybrid war between Audi and Toyota will be there too.

Some of the teams and drivers that will compete in the opening round of the FIA World Endurance Championship at Silverstone on the 12-14 April wowed the capital of the United Kingdom today with a photo call and media event in the centre of London.

With the iconic Tower Bridge as a back drop the Strakka Racing HPD-Honda LMP1, the Aston Martin Racing Vantage V8 LMGTE and RAM Racing’s European Le Mans Series entered Ferrari 458 provided a focal point for Londoners to sample the Spirit of Le Mans.

Stéphane Sarrazin (Toyota), Darren Turner (Aston Martin Racing), Alex Brundle (Oak Racing), Nick Leventis, Jonny Kane and Danny Watts (Strakka Racing) and Tor Grave and John Martin (Delta-ADR) all posed for pictures with the cars and the world famous Royal Automobile Club Tourist Trophy, which will be awarded to the winning drivers at the 6 Hours of Silverstone on the 14 April. 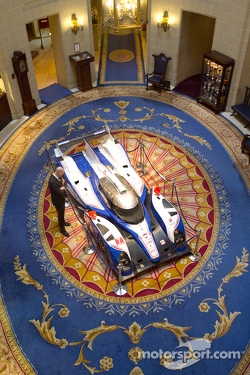 The Toyota TS030 Hybrid on display

After the photo call, it was back to the Royal Automobile Club on Pall Mall, where the race winning Toyota TS030 Hybrid was on display, for a short presentation, media lunch and further photographs and interview opportunities.

Gérard Neveu, CEO of the FIA World Endurance Championship, said: “This is a great honour to be here at the Royal Automobile Club here in London and to have the opportunity to present the opening round of the 2013 championship to the UK media and the fans in Potters Field.

We would also like to thank the Royal Automobile Club for the opportunity of presenting the Tourist Trophy to the winning drivers of the 6 Hours of Silverstone.

The trophy has a long and rich history stretching back to 1905 and we are extremely pleased to be able to continue this legacy in 2013 and beyond. We look forward to seeing you all at Silverstone in just three weeks’ time.”

The excitement is tangible and there is a real sense of anticipation for the opening round of the World Endurance Championship at Silverstone. The battle for the Tourist Trophy, Audi versus Toyota, we really don’t know how it is going to go and who will win.

It is also an amazing grid of thirty five cars with Aston Martin in LMGTE looking for success on home soil but the Ferrari and Porsche works teams are going to be strong.

The 6 Hours of Silverstone will be the first real test of the year before the 24 Hours of Le Mans in June. These great brands have a tremendous association with the Tourist Trophy but Audi and Toyota have yet to put their name on it, so may the best car win.”

The 6 Hours of Silverstone will take place on the 12-14 April 2013 at the home of UK motorsport. The race weekend will feature Round 1 of the FIA World Endurance Championship, which will be for the Royal Automobile Club Tourist Trophy, and also the opening round of the European Le Mans Series, which are both promoted by the Automobile Club de l’Ouest (ACO).

The weekend at Silverstone also features the second event on the 2013 FIA European Formula 3 Series calendar.

Ayrton did not truly die

Top 5 ugliest cars of Formula One

Twelfth place for Tagliani in Brazil