6 Hours of Fuji: The Ferrari of Bruni and Vilander back to winning ways 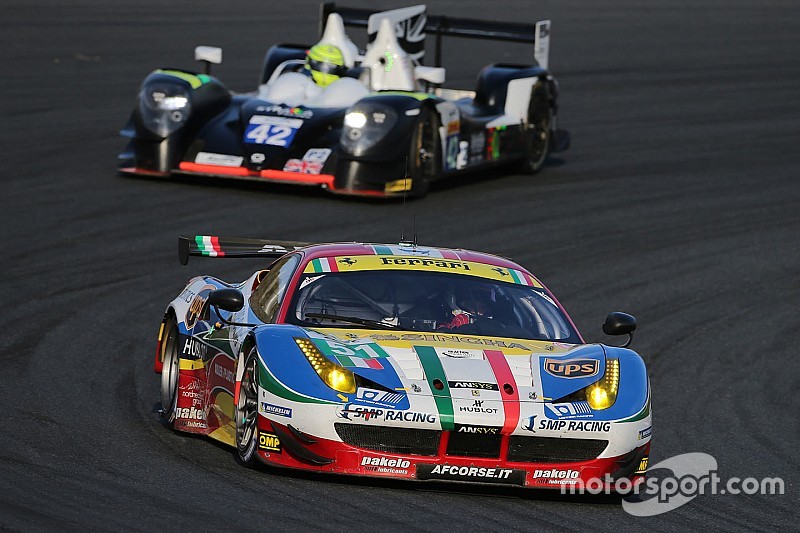 Oyama - Maybe bad luck is finally over. The Ferrari of AF Corse pulled off a stunning win on Sunday at the 6 Hours of Fuji, Japan, the third last round of the World Endurance Championship (WEC). In the shadow of the famous mountain, "Gimmi" Bruni and Toni Vilander overcame the bad weather to beat the Porsche no. 92 of Patrick Pilet and Frederic Makowiecki and the other Ferrari of James Calado and Davide Rigon who won some important points for the drivers' and constructors' championships.

GTE-Pro. The race began after half-an-hour behind the Safety Car due to the heavy rain. At the start James Calado did well to keep first place in front of Vilander although the Porsches soon overtook the Finn, with the bad conditions possibly favouring the German cars. Porsche also managed to take first place as intermittent rain stopped the track from drying out. In this situation car no. 51 decided not to waste time, stopping twice just for fuel and keeping the same tyres, with Vilander at the wheel for over three hours.

I was by far the fastest on the track and in the end, thanks to the yellow flag, I also managed to avoid another refueling.

The decisive move came two and a half hours from the finish, when at the first full pit stop dry tyres were fitted on the car, now in the hands of "Gimmi" Bruni. It was the same with car no. 71, while the two Porsche decided to stick with wet weather tyres. After a bit of a struggle to warm the tyres, this turned out to be the right decision. The Porsches had to return to the pit to change tyres allowing the two 458 Italias to take first and third places, which after a spin by Porsche no. 92 became second.

In the final stages Bruni had everything under control, while James Calado was involved in a great fight with Porsche no. 92, which managed to overtake the English driver with just four minutes to go. Ferrari has extended its lead to 13 points in the constructors' table, while all four drivers made up ground on Richard Lietz (Porsche), who is now only 7 points ahead of Rigon-Calado and 16.5 in front of Bruni-Vilander.

GTE-Am. It was a less successful day than usual in the GTE-Am class. Car no. 83 AF Corse secured a podium finish with François Perrodo, Rui Aguas and Emmanuel Collard, while SMP Racing's championship leaders were unlucky. Andrea Bertolini, Aleksey Basov and Viktor Shaytar suffered a puncture after they had already had to serve a 30-second stop&go penalty for speeding in the pitlane. However, the 458 Italia crew still has a 29- point lead over their closest rivals and at Shanghai, at the end of the month, could wrap things up with a race to spare.

Antonello Coletta, Head of Attività Sportive GT: "I am very happy. The recovery we wanted came after two races where we hadn't picked up the results we deserved. Here at Fuji almost everything went smoothly and we got a win and also the second car was on the podium. We stretched our lead in the constructors' table by a few points while also recovering in the drivers' one. Congratulations go to François Perrodo, Rui Aguas and Emmanuel Collard for third place in the Am class, while I am sorry that SMP Racing had a bad day. Bertolini, Basov and Shaytar still lead the championship and luckily theit advantage can be managed. There are still two races to go. The season is still long and we will do our utmost until the end."

Amato Ferrari, AF Corse team owner: "This is a great day, which we needed after drawing a few too many blanks. We did some "reset" and arrived at Fuji sure we could get back to winning ways. The team and drivers were fantastic and we regained ground in the teams' and drivers' tables. We’re ready to give everything until the last turn of the Bahrain race."

“Gimmi” Bruni, driver car #51 (winner GTE-Pro): "Finally we are back to winning ways! It was a very tough race especially on the mental level and in terms of concentration also because in the end it was only after three and a half hours that I got in the car. At the pit stop Toni told me to put on slicks so we did. Perhaps the track wasn't yet ready for slicks, but after three laps I was able to push and I realized it was the right decision. I was by far the fastest on the track and in the end, thanks to the yellow flag, I also managed to avoid another refueling."

Toni Vilander, driver car #51 (winner GTE-Pro): "We set off after many laps behind the Safety Car, but that was unavoidable given the amount of water there was on the track. After the start my grip was good and I managed to follow the Porsches in conditions in which they are usually favourite. We worked a lot on strategy and chanced on the right decision at the right time. It looked like the track was drying but in reality it never did. But then things felt right and so I suggested the team and "Gimmi" that we use the slicks, after which we took off. We need to continue like this in Shanghai and Bahrain. Today's result is key for the constructors' championship, while we are still behind in the drivers' one. We must keep winning”.

Davide Rigon, driver car #71 (3rd GTE-Pro): "I'm happy with the final result. James really didn't put a foot wrong today. In the end the Porsche overtook him but we were saving fuel and unable to defend ourselves. Unfortunately we lost a lot of time in my first stint and we had to analyse what had gone on with the tyres. I had no grip and I couldn't heat them up. However, during my second drive I was the fastest on the track. Maybe strategically speaking we didn't make the best decision today"

James Calado, driver car #71 (3rd GTE-Pro): "We secured important points. However, I can't say that I'm not bitter about the final laps. I was saving fuel and so I struggled to defend myself against a very fast Porsche. I thought I could keep it behind me, but in the end Pilet succeeding in overtaking. On the plus side, we won points for Ferrari against Porsche, while in the drivers' championship we gained ground on the leader and the table is now even tighter.”