24 Heures du Mans: The greatest challenge conquered by Audi, Strakka and OAK in LMP1 and 2

The GTE classes : Porsche marks 50th Anniversary of the 911 with victory at Le Mans. Many of the teams and drivers paid tribute to Aston Martin’s Allan Simonsen whose life ended on Saturday morning.

If ever there was a race which represented the ‘Spirit of Le Mans’ it was this year’s 81st edition, the third round of the FIA World Endurance Championship.

The 56 competitors who took the start and the 42 who were classified at the finish line at 15:00h today all displayed the qualities of endurance, competition, teamwork and determination in the face of adversity which personifies the most famous sportscar race in the world.

The No.2 Audi Sport Team Joest R18 e-tron quattro won today, after having led the race from the 7th hours; it is Tom Kristensen’s ninth victory, Allan McNish’s third and Loîc Duval’s first and the result moves the trio firmly into the lead of the World Endurance Drivers championship.

They crossed the line ahead of the No.8 Toyota Racing TS030 Hybrid of Sébastien Buemi, Anthony Davidson and Stéphane Sarrazin. In third place was the No.3 Audi R18 of Jarvis-Gené-di Grassi.

The challenges for the race were many and constant throughout the 24 hours, with the entire paddock reeling in the early hours at the news of the loss of Aston Martin’s Allan Simonsen, Kristensen’s Danish countryman, to whom he paid tribute on the podium and after the race. 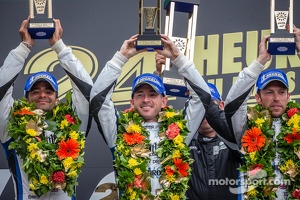 The Sarthois weather was also determined to play its hand in the outcome of the race and the rain showers were many and frequent from start to finish.

A final heavy rain shower 30 minutes from the finish threatened the result of many, but nothing was going to prevent the No.21 Strakka Racing HPD ARX03c from taking victory in the LMP1 Privateer category with Nick Leventis, Jonny Kane and Danny Watts enjoying the view from the top of the podium for the first time in 2013.

Their rivals Rebellion Racing uncharacteristically ran into problems with both their Lola Toyotas, but the team made superb efforts to get the No.12 and No.13 cars back on track to finish the race and thus claim points.

LMP2 victory went to OAK Racing, the French team actually claiming a dominant 1-2 in class with their Morgan-Nissans. After a race-long battle between the two, it was the No.35 of Bertrand Baguette-Martin Plowman and Ricardo Gonzalez which prevailed over the No.24 of Olivier Pla-Alex Brundle-David Heinemeier Hansson.

The Onroak-designed chassis and the entire OAK Racing team performed flawlessly to achieve their first victory in a FIA World Endurance Championship round and Oak Racing now lead the FIA Endurance Trophy for LMP2 teams. Third in class went to the No.26 G-Drive Racing ORECA Nissan of Roman Rusinov-Mike Conway-John Martin.

This year’s 24 Heures du Mans should have been a cause for celebration for many including the Automobile Club de l’Ouest, marking 90 years since the first 24-hour event in La Sarthe, Aston Martin Racing, which was founded 100 years ago, and Porsche – the iconic 911 was first launched 50 years ago. 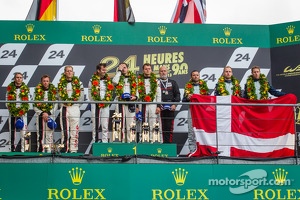 At the chequered flag it was the new-for-2013 No.92 Porsche AG Team Manthey of Marc Lieb-Richard Lietz-Romain Dumas which crossed the finish line ahead of all others in the LMGTE Pro category. Celebrations were, however, tempered by the tragic loss of Aston Martin Racing driver Allan Simonsen in the opening hour of the race – an incident which affected many throughout the paddock who had known and raced against him.

In fact, Porsche recorded an extremely impressive 1-2 in the LMGTE Pro category plus victory in the LMGTE Am class. Second Pro car to cross the line was the sister No.91 entry of Jörg Bergmeister-Patrick Pilet-Timo Bernhard, the only other car to finish on the same lap as the class leader.

Third in class was the No.97 Aston Martin Vantage GTE of Darren Turner-Stefan Mücke-Peter Dumbreck who had desperately been hoping to claim victory in tribute to their team mate. The Aston had led the category for the first four hours before relinquishing the place to its sister car, the No.99 of Fred Makowiecki-Rob Bell-Bruno Senna. This last trio had led from hour 5 until just before 10:00h when, during one of the many frequent and unpredictable rain showers, Makowiecki lost control and crashed the car.

The weather and track conditions were the largest contributor to the 11 safety car periods which punctuated the event. With such a large field, there are in fact three cars which pick up and control the four different classes.

LMGTE Am also had a Porsche on top of the podium, with the IMSA Performance Matmut team of Rouen-based Raymond Narac claiming class honours. The No.76 Porsche 911 GT3 RSR took control of the category from the 11th hour and performed flawlessly to control the race to the end. Behind them were two AF Corse Ferrari 458 Italias – the No.55 of Perrazini-Casé-O’Young finished just 1m26s in front of the FIA WEC entry of Jack Gerber-Matt Griffin-Marco Cioci after 24 hours of long, hard racing.