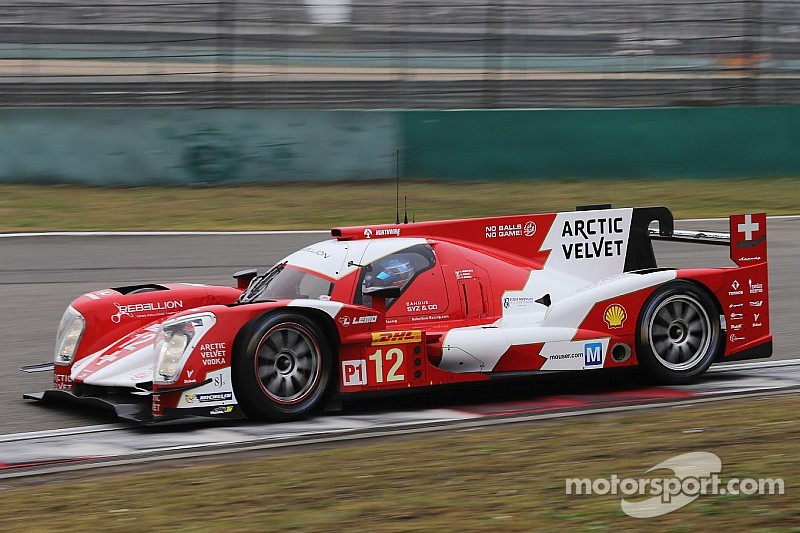 Starting from the fourth row on the grid, both Rebellion R-One Toyotas had an almost trouble free race from the start to the checkered flag.

Nick Heidfeld, Nicolas Prost and Mathias Beche secured their fifth LMP1-L win of the season after the 6 Hours of Shanghai, the sixth round of the 2014 FIA World Endurance Championship.

Andrea Belicchi, Dominik Krahaimer and Fabio Leimer finished in second place to complete the second one-two of the season for Rebellion Racing, back to back after the one-two achieved at Fuji three weeks ago.

Starting from the fourth row on the grid, both Rebellion R-One Toyotas #12 and #13 had an almost trouble free race from the start to the checkered flag, keeping their positions, respectively in P7 and P8 all race long.

I think we are going in the right direction with this car. This is very encouraging for the end of the season.

Nicolas Prost in the cockpit of the #12 had to face an unusual issue during his double stint. Just after the beginning of his run, two and a half hours before the end of the race, his water bottle holder broke and fell down damaging the car’s radio.

Slowing down to keep all this moving material in a safe place, the French driver managed to avoid having to make an unscheduled pit stop, and drove a double stint in those tough conditions, with no radio and without anything to drink.

Nicolas managed to drive safely until his scheduled final stop. Thanks to the car #12 crew, everything was fixed quickly during the pit stop and Mathias Beche took the wheel for the last stint with everything back in the right place and the car still in seventh place.

All the other drivers of both the #12 and #13 cars had regular stints trying to find a good driving balance between performance and fuel saving.

Car #12 took the checkered flag in seventh place overall just 39 seconds ahead of the sister car #13 driven to 8th position by Fabio Leimer during the final stint.
The strong showing during today’s 6 hours of Shanghai by the two REBELLION Racing team cars demonstrates the progress in both the pace and the reliability of the only six month old Rebellion R-Ones.

Today's LMP1-L win was the sixth in six races this season for Rebellion Racing.

The team is now looking forward to Bahrain to see how the two Rebellion R-One Toyotas will perform in the demanding challenge of the desert heat.

Nicolas Prost – Rebellion R-One Toyota #12: “ Obviously, before the race, we were a bit worried that car #13 might be very quick. But I think that today we had a very good pace in our car. We just had an issue with the drinks water bottle and radio inside the car which cost us a lot of lap time, but no significant time in the pit. Happily the pace of the car was really much better than before. So, I think we are going in the right direction with this car. This is very encouraging for the end of the season.”

Nick Heidfeld – Rebellion R-One Toyota #12: “ When I took over the wheel of the car, the gap to car #13 was already close to 20 seconds. Our target was to try to save fuel to not have to stop for a splash at the end. But to be safe, we decided to splash anyway, so we ended the race close to the #13 car. It's good to see that both cars had a trouble free race. As Nico said we had some little problems, but at least we had a bit of a fight and it was good fun. We improved the car. As we don't do much testing and we're learning all the time, it's quite enjoyable when things and the car progress like that. “

Mathias Beche – Rebellion R-One Toyota #12: “It was quite a good race for us. A good start, I managed to make a gap to the sister car. For sure the battle is nice with #13. There are only two cars, but very close. I'm a bit disappointed to not have been able to avoid the last splash, I tried to work hard for that, but we preferred to go safe because there was no point in taking a big risk. We're now looking forward to the two last races of this season.”

Andrea Belicchi – Rebellion R-One Toyota #13: “ It's the first time this season that we finished without problem with both cars on the podium. It seems that the #12 did a very good job with their set up. We were struggling a bit during the practices, but by the race we had a better car. It's normal because as we want to develop the car, we try different set ups between the two cars. It seems that today, the set up of the #12 was working a little bit better than ours.

But as I said on my side, I'm not that happy with myself because I was not as competitive as I would like to be. I was struggling a bit with the car, but I'm happy with the result. I'm happy for the team, for the crew and for Alexandre and Bart. We deserve this 1 – 2 today, the team have worked really hard all season. So it's a nice result for all of us.”

Dominique Kraihammer – Rebellion R-One Toyota #13: “ Although we finished second, I'm not completely happy with how everything went. Performance was lacking a bit and I don't know why. Actually, we have to analyse the data to see what we can learn. It was the first race without any problem like big issues, without any time in the pit having to repair anything, which is good.

But when I was in the car, it was not easy and we had to save fuel. I tried very hard but it cost lap time and it didn't pay off. It didn't make any difference in the end, we had to do a splash and dash.

I would have liked to push a lot more. Fabio did very well, perhaps the track condition when he was in the car made it easier to drive ? It seems that Andrea and I had a biggest struggle, but Fabio did well. We finished on the podium and we finished our second race. We'll be back again at Bahrain ! “

Fabio Leimer – Rebellion R-One Toyota #13: “ Today’s race was pretty good. We finished the race for the second time, but in P2 when what you really want is the win. We were a bit too slow today compared to sister car #12. Overall, I think we can be happy though. Personally, I had some really nice stints here and I'm quite happy about that. Even if the car was not exactly 100% how we would have liked it to be, we can see progress and the way to go, that's encouraging. Now we'll see how we do in Bahrain.”

Bart Hayden – Rebellion Racing Team Manager: “ We’re very happy to get both cars to the end of the 6 hour race without any real issues. Sure, there were a couple of niggles, particularly with the drinks bottle and radio in car #12, but our race didn’t suffer because of those and all the drivers had lots of time in the cars. When your cars are so close to each other it can be a bit nerve-wracking at times, but it adds a bit of excitement and we were smiling at the end as we all stood on the podium.

The mechanics and engineers have been extremely thorough in the preparation of the cars since the last race at Fuji, and I think that that level of extra attention to detail has helped us get this result today. Each race we learn more about the R-One cars, so we’re confident as we go on to Bahrain and are looking forward to racing there again. “