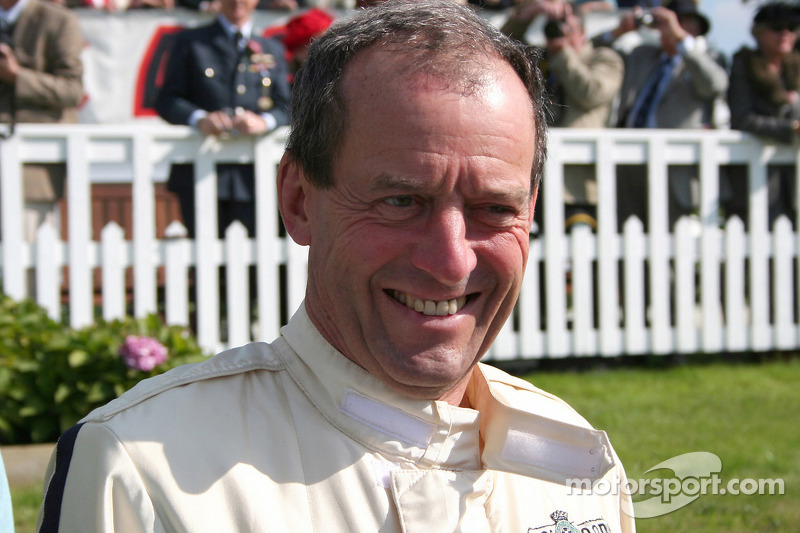 The 2014 Sonoma Historic Motorsports Festival produced another historic moment this year when three racing legends who were instrumental in the creation, development and racing of the Shadow Can-Am cars discussed the early Can-Am years "through the eyes of Shadow."

Moderating the panel discussion in a room packed with racers and fans at Sonoma Raceway was journalist/photographer Pete Lyons, author of "Can-Am Cars in Detail" and "Fast Lines," who is also working on a book about the Shadow cars. He shared his extensive knowledge of why the SCCA established the Can-Am Series and how (and why) the radical Shadow Cars made their splash on the racing scene.

Also on the panel were Don Nichols, founder of Nichols Advanced Vehicle Systems (AVS) in 1968, and principal behind Shadow Racing Inc.; George Follmer, winner of the 1972 Can-Am Championship and partner to 1974 champion Jackie Oliver (in photo) on the Shadow team; and Trevor Harris, the innovative creator of the very first AVS Shadow Mark 1, the ultra-radical "Tiny Tire" car that Follmer debuted in 1970.

In attendance were Fred Cziska, of Petaluma, Calif., and Dennis Losher, of Twain Harte, Calif., the current owners of the 1972 Shadow DN2 and 1971 Shadow MKII, respectively, that were displayed during the seminar.

"I always said that one of the hidden values of historic car racing," said Lyons, "is it brings all these wonderful people together in an atmosphere where they're not competitive. In professional racing they're always guarding secrets and they're being careful what they say, and now you get them together and they've forgotten their old animosities, they're good friends, you see lots of hugs and hand shakes and back slaps and trading of emails.

Follmer was lauded for his abilities as a race-car driver, especially when overcoming some of the Shadows' shortcomings. "He was one of the strongest drivers ever," said Lyons. "He would drive anything. He raced the 'tiny tire' contraption, the 'knee-high' car, as Nichols called it, twice and didn't hang back and drove it hard."

Said Follmer, "The Shadows are a big part of racing history. They've been involved with just about everything but Indy cars. That's an accomplishment. Don said that he thinks he's built 100 cars throughout his career. That's a lot of race cars."

Nichols explained the origin of the name "Shadow," Harris discussed the cooling and friction shock problems they had on the "knee-high" car, and Lyons described how Nichols, a paratrooper who was wounded landing behind enemy lines on D-Day in World II became an entrepreneur who wanted to "race in the Can-Am because it was such an exciting, technically advanced arena, and then gathered around him people who felt the same way. Trevor Harris, one of the most brilliant creative minds, was the first one."

"I thought the seminar was really terrific," added Harris. "As the designer of the first Shadow, it was great to be with Don Nichols, who was there through the whole Shadow era, and George Follmer and Pete Lyons. The Shadow competed in Grand Prix racing, Formula 5000, and Can-Am at the highest level. It was terrific to have a group of us together to talk about it.

"We're not going to have a chance to have such a group get together many more times."

The seminar may be viewed on YouTube at https://www.youtube.com/watch?v=yzXnRlEmRZ4