The Silverstone Classic is, quite simply, the biggest historic race meeting in the world. Both the old and new paddocks of 'the home of British motorsport' are used to pack in hundreds of evocative racing cars of the past, which are then given the opportunity to properly stretch their legs on the wide-open straights and sweeping bends of this traditional high-speed track. 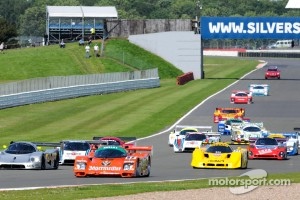 The key feature of this meeting is how it spans almost the entire history of the sport: from a handful of pre-war Grand Prix cars right up to the Super Touring and Group C machines of the 1990s, fans get a chance to relive races they may have seen as a child, or witness cars race that they had previously only read about in books. Torrential rain on Friday threatened to spoil the 2012 running of this wonderful event, but blazing sunshine broke through on Saturday and Sunday, much to everyone's relief.

Single-seaters were well represented, with two races for the close and furious competition of the Historic Formula Junior machines, and new category this year in honour of recently deceased British driver Peter Gethin, catering for historic Formula 2 and Formula 5000 cars. Gethin's 1970 British F2 Championship-winning McLaren M10B was present and correct, while the leading F5000 entrant was young British GT racing ace Michael Lyons, driving a Chevy V8-powered Lola T400 from his father's stable. Other notable entries included an ex-Jacques Lafitte March 742 piloted by the vastly experienced Martin Stretton. His rival on the track (and in the business of preparing historic racing cars) Simon Hadfield, brought out a pair of Trojan T101s – one for himself and one for Autosport magazine journalist Ben Anderson.

Fans of Formula 1 saw a famous name of the past return at Silverstone – but it wasn't a driver, car or team. Rather it was an event sponsor: the Daily Express newspaper, which backed the high-profile International Trophy non-championship race at the Northamptonshire circuit in the 1970s. 2012 saw the event being run as a round of the Historic Grand Prix Masters series, featuring such storied cars as an ex-Alan Jones Williams FW07, ex-Jean-Pierre Jarier Tyrell 009 and ex-Riccardo Patrese Arrows A1. Not to mention the iconic Marlboro-livered McLaren M26 that maverick Brit James Hunt drove to the F1 World Championship title in 1976. Cars more famous for their innovative design than the achievements of their drivers included two six-wheelers: a Tyrell and a March – the latter of which never raced in-period. Earlier eras of F1 were also well represented, with classes for pre-1966 rear-engined and pre-1961 front-engined Grand Prix machinery. The second of those two included an intriguing mix of pre- and post-war cars, spanning the formation of the World Championship and the years before it. 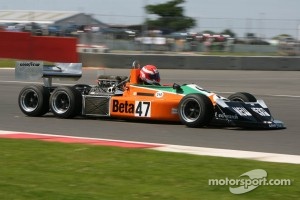 Touring cars have always been close to the hearts of European motorsport fans in general, and British enthusiasts in particular, so two of the weekend's classes showcased a pair of golden eras in the long history of 'tin tops'. First there were the Minis, Lotus Cortinas, Alfa Giulias and BMW 1800s of the Alan Mann Trophy for under 2-litre touring cars, then the more modern machinery taking part in the Fujifilm Touring Car Trophy. Many fans continue to regard the 1990s Super Touring era as the pinnacle of this type of racing, and the BTCC's heyday was well represented with a selection of Ford Mondeos, Nissan Primeras and Vauxhall Cavaliers – one of the latter with current Toyota BTCC ace Frank Wrathall behind the wheel. There were some older cars as well: mighty Group A Ford Sierra RS500s and two examples of the thunderous Broadspeed-prepared Jaguar XJ-S.

Britain's success in sportscar racing down through the years was also on show at Silverstone: from the Le Mans-winning Aston Martin DBR1 and ultra-rare Jaguar D-Type racing in the Stirling Moss Trophy race for pre-1961 sportscars, to the variety of the Woodcote Trophy grid for pre-'55 cars. That featured no less than six Jaguar D-Types, DB2 and DB3 Aston Martins, as well as the racing representatives of marques that sadly no longer exist, such as Austin-Healey and Frazer-Nash. European GT racing was just as widespread and diverse in the post-war era as it is today, and two of the most popular classes at the Classic each year are the Masters pre-'66 GTs and the RAC Tourist Trophy for pre-'63 GT s. The latter featured some of the most valuable and evocative machinery seen all weekend: cars like the Ferrari 250 GT SWB, Jaguar E-Type and Wolfgang Friedrichs' unique Aston Martin DP212. Another Aston entry came from a recent Aston Martin GT and Lola LM P1 entrant at Le Mans: Lord Paul Drayson, at the wheel of a DB4 GT. 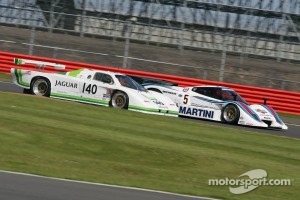 But even these fabulous Grand Tourers were eclipsed by the varied and colourful World Sportscar Masters grid, which took to the track at the height of the Sunday afternoon sunshine. This line-up was all about noise, speed and power, featuring giants of Le Mans like the Lola T70, McLaren M1B plus the Ferrari 512, 512S and 312PB. Further highlights included fine examples of the Chevron B8 and plenty of one of the crowd favourites – the Ford GT40. Taking the sportscar story up to the end of the 1980s were the Group C racers, occupying their traditional Saturday twilight slot as well as a second race on Sunday. Although the absence of Silk Cut Jaguars and mechanical problems for the Peugeot 905 were disappointments, fans were still treated to a pair of very fine races, including a dogged pursuit of Gareth Evans' Mercedes C9 by modern-day prototype star Nicolas Minassian in a Lancia LC2 on Sunday.

This Week in Racing History (March 3-9)