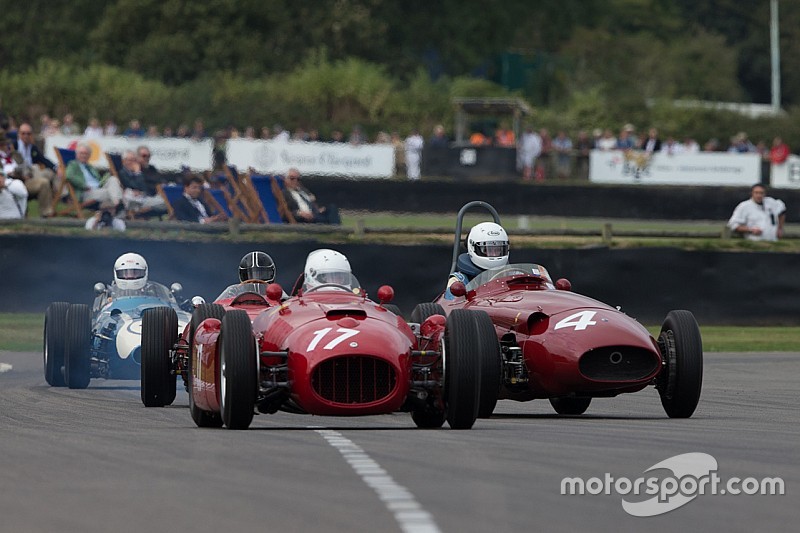 Some of the biggest names in the sport will race at this weekend's Goodwood Revival meeting during the most colourful and theatrical event in the historic racing season.

For one weekend each late summer the former Westhampnett airfield becomes a racing time warp, reliving the period up to 1966 when the Sussex track originally closed for racing.

While the side attractions are many and varied, the racing is deadly serious and a raft of famous names will take on the leading forces in historic racing across 14 races.

Le Mans 24 Hours winners, ex-Formula 1 drivers and touring car stars will all don period garb to race cars of the 1950s and 1960s and give the sell-out crowd the spectacle and sense of occasion that is a key part of the Revival package.

Multiple Le Mans winners Tom Kristensen and Derek Bell are star attractions and nine-time victor Kristensen will race a Ford Thunderbird and a Jaguar E-type, with a view to repeating his 2015 St Mary's Trophy win.

Bell will start the weekend at his former home track at the wheel of the Ferrari 250GT SWB of Marc Devis in the Kinrara Trophy, the weekend's opening race into the dusk of Friday evening.

Oliver will campaign a rare BMW 700 in the St Mary's Trophy while Mass will handle a stunning Mercedes 300SL 'gullwing' in the Freddie March Memorial Trophy for pre '56 sports and GT cars.

Recent World Touring Car champions Andy Priaulx and Rob Huff, along with period aces like Steve Soper and John Cleland, are in action in a range of cars.

Meanwhile, the BTCC class of 2017 is strongly represented – Gordon Shedden, Jason Plato, Andrew Jordan, Matt Neal, Mat Jackson and Adam Morgan are all in the St Mary's Trophy race in pre-1960 touring cars, while some of them, including Colin Turkington, will also race in the TT Celebration.

Shedden and Morgan are in nimble Austin A35s, while Neal and Jordan will be pacesetters in A40s and Jordan will team with his father Mike in pursuit of another Goodwood victory.

Of course, many of the cars in action are just as big a draw as the drivers and stand-outs include the multi million pound JCB-owned Ferrari 250GTO in the TT Celebration race – in the hands of Andy Newall and Frank Stippler it will be raced just as hard as when it was new in 1964.

On the curious list is the late 1950s Studebaker Golden Hawk that former BTCC ace Patrick Watts has built into a racer for the St Mary's Trophy.

A recent test at Brands Hatch ended in a wild ride when a rear wheel came off, but Watts will be good value as ever once the US monster is back on four wheels.