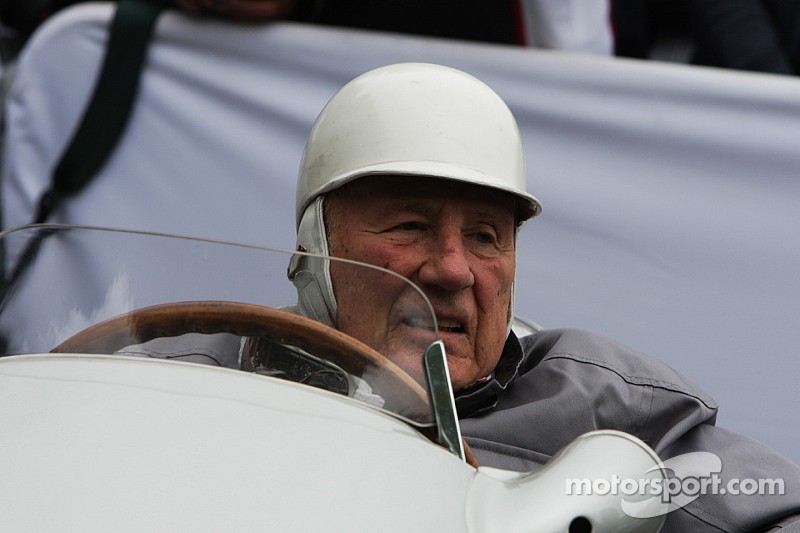 Stars are human, like Sir Stirling Moss and Derek Bell, and automotive.

There are many elements that contribute to the mystique of vintage motor racing, but famous names of drivers from the past transcend all else. At Saturday's Rolex Monterey Motorsports Reunion, Sir Stirling Moss (in photo), one of the sport’s greatest drivers and most recognizable names, made a stir as an honored guest.

Indeed, his presence was no less regarded than that of a famous movie star, and after the knighted driver bantered at a lunch break “picnic” for the attending public’s pleasure with the recently retired Scottish driver Allan McNish (three-time winner of the 24 Hours of Le Mans, most recently in 2013), he obliged hundreds of fans with autographs on everything from a vintage steering wheel to a 1956 photo—showing him dashingly at his prime--that had been saved by a fan for just such a lucky day.

“It’s wonderful to come to events like the Rolex Monterey Motorsports Reunion and be surrounded by like-minded people,” said Moss, who retired from racing (vintage cars) when he was 83 and turns 85 in September. “There are many people here who weren’t even born when I stopped racing (professionally), yet they are so polite and respectful; it makes me feel very good.”

Perhaps most fascinating about the exchange between Moss and McNish was the comparison between then—1948 to 1962 when Sir Stirling was racing—and now in terms of the technology available.  Moss would have given anything for a data stream to analyze not just elapsed time and top speed but how the car performed at every juncture and what problems might be arising. “Having the intercom on between the driver and the pits is fascinating to me,” said Moss, who talked about many “frightening” moments he had to face alone in his cockpit.  McNish knowingly countered, “It’s always risk vs. reward, but it’s a different kind of bravery now.”

Another folk-hero driver, Derek Bell, drove a 1957 Maserati 300S in Saturday's races, which hosted seven groups of historic automobiles determined by era or class. (Sunday, eight entirely different groups will have their turn.) Bell made his mark in motorsports by winning Le Mans five times, The World Sportscar Championship twice, and the Rolex 24 At Daytona three times.

“The most satisfying time for me in my career was obviously being successful in sports cars; however, the fact that I came through Formula 3, Formula 2 and then climbed into a Ferrari Formula 1 car at Watkins Glen in 1968 to finish sixth in my first F1 race was very satisfying,” said Bell. “I couldn’t have done what I did in sports cars had it not been for my experience in single seaters.  Thanks to Porsche’s great cars and my great teammates, I consider my racing career a success.”

Bell, who relishes driving “some of the lovely cars I raced in the day,” couldn’t be more pleased about vintage racing’s popularity. “There are plenty of great private vintage car owners out there who have plenty of money to buy the cars and the spare parts; they drive them and enjoy them and then sell them to other people to enjoy.  Rolex has done an amazing job of supporting the sport and getting everybody excited to be a part of it.”

Not all the professional drivers at the Rolex Monterey Motorsports Reunion are retired.  Marino Franchitti is currently competing in the Tudor United Sportscar Championship but also races in select vintage races.  Although most of the vintage cars raced in anger before he was born, he appreciates the history they represent.

“Actually I have raced a good number of cars older than me, including a Birdcage Maserati,” said Franchitti.  “I like to put myself in similar situations to my heroes and be able to experience that.”

Franchitti’s friend Harley Cluxton only recently bought the car Franchitti raced Saturday, a 1975 Gulf Mirage GR8, and it arrived in this country a short while ago.  “We’ve had a few issues, but to drive a DFV powered Le Mans prototype from the 1970s is outstanding.  This morning we ran out of gas, but while it was running I had such a blast.  I’m used to jumping in and out of all different kinds of cars, so I deal with what I have at the time.  I never drive these cars 10/10ths; I leave more of a margin than I do in my modern stuff.  This whole experience is as much a show for the fans as it is for us, so you have to have a different mentality going in and a different way of approaching it.”