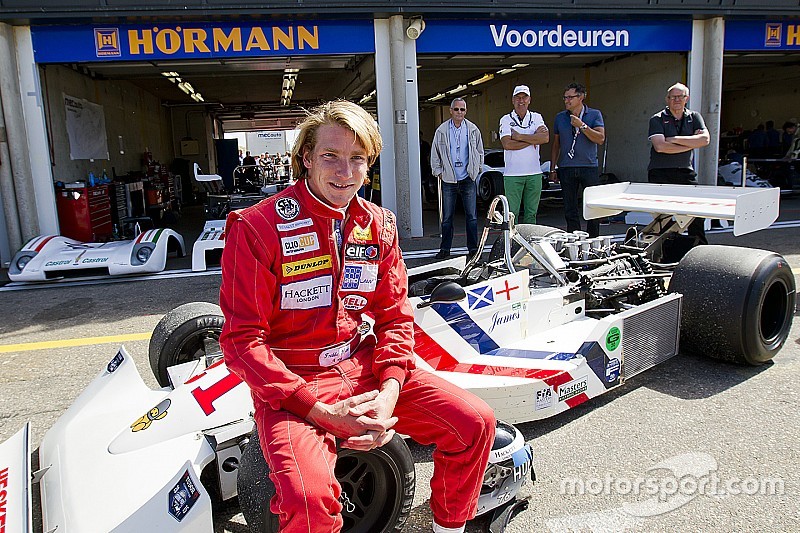 Freddie demonstrated the Hesketh 308C at Circuit Park Zandvoort on the birthday of his father, the 1976 Formula 1 champion James Hunt. It’s 40 years ago that James celebrated his first F1 victory at the Dutch race track.

A tactical decision in rainy conditions had put James in the lead of 1975 Dutch Grand Prix. Despite being under pressure of Ferrari driver Niki Lauda, James withstood numerous attacks from his rival and wrote history by winning his first Grand Prix.

Yesterday, 40 years after the memorable win, Freddie got behind the wheel of the white Hesketh race car to perform demonstrations during the event ‘Historic Grand Prix Zandvoort’.

Although plagued by a small clutch problem when the pit exit lights turned green and an uncomfortable cockpit position, Hunt was able to pay a tribute to his father by completing his first laps around the track.

“It’s an incredible feeling to drive here at Zandvoort, 40 years after my dad’s first win and today he would have celebrated his 68th birthday,” Freddie told Motorsport.com.

“The car is really powerful, but I couldn’t push it as my seatbelts didn’t fit properly. So I had to be careful and I have never driven here before.

"But Zandvoort is such a great track, rich of history and there is not much room for error when you make a mistake. It’s an honour being here driving for such a great crowd and I’m really enjoying it.”

Freddie pursuits a career in GT racing with the ultimate goal of participating in the 24 Hours of Le Mans. He’s targeting a race seat in the Blancpain GT Series for 2016.