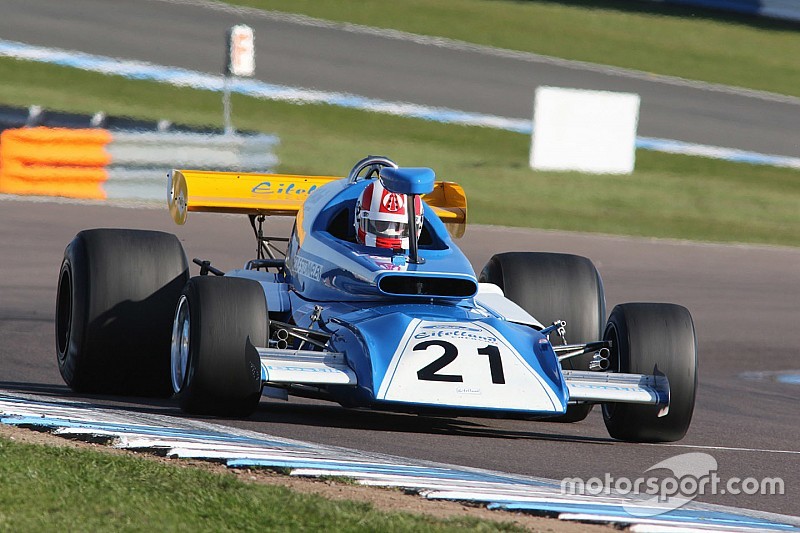 Formula 1 cars will race against Formula 5000s at Silverstone this weekend, 42 years after the last non-championship International Trophy race at the British Grand Prix venue.

This weekend’s double-header for the HSCC Derek Bell Trophy will pit a brace of historic Grand Prix cars against eight Formula 5000s in a re-creation of the annual early-season non-championship F1 race at Silverstone.

The BRDC International Trophy dates right back to 1949 when Alberto Ascari won in his Ferrari 125.

By the early 1970s, non-championship F1 races were losing support and cars from the new Formula 5000 category for 5-litre V8-powered single-seaters were added to the grid to make up the numbers. The marriage of convenience lasted for six years and famously delivered James Hunt’s first F1 win in 1974, but when Niki Lauda won a year later in his Ferrari 312T the race’s F1 story came to a close.

More than four decades later, topping this weekend’s F1 entry is the 1978 Fittipaldi F5A of FIA Masters Historic Formula One racer Max Smith-Hilliard and he is joined by David Shaw in the quirky Eifelland development of the March 721.

“It was a March 721 that was taken over by the Eifelland team in Germany and they employed Luigi Colani to help them design different bodywork, which they hoped would project them to the front of the F1 grid – but it never did,” said Shaw.

“It has been featured in articles as one of the ugliest F1 cars but I really like it. I bought it in bits and we got all the bodywork put back to original and when we took it to Monaco last year it was the first time it had run in Eifelland trim since 1972.

“It’s such an unusual piece of history. It is a fascinating story from a time when all the cars were different shapes.”

Aiming to challenge the Cosworth DFV-powered Grand Prix car will be pacesetters from the F5000 ranks including Neil Glover in the ex-Peter Gethin Chevron B37, the spectacular Gurney Eagle of Frank Lyons, regular race winner Mark Dwyer (Lola T332) and recent F5000 convert Jamie Brashaw in his March 73A.