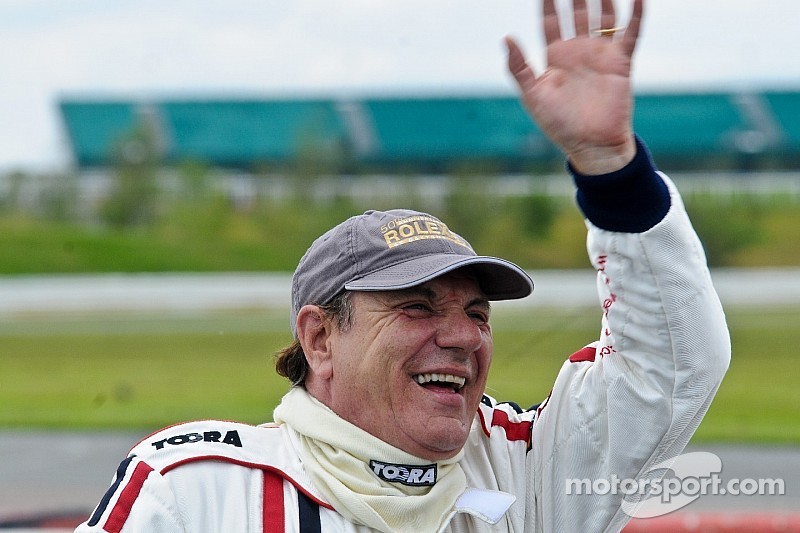 Nothing old-fashioned about the historic event.

AC/DC front man Brian Johnson left fans "thunderstruck" at the fifth annual Croft Nostalgia Weekend, and admitted that he had so much fun he is eager to return to the retro-flavoured festival next year.

As spectators and competitors emerged bleary-eyed following a rousing dinner-dance on Saturday evening, and as the sun put in a welcome appearance, the drivers prepared to take to the grid – watched over by Chris Meek, one of the starters in the inaugural 1964 Daily Mirror Trophy Meeting, 50 years ago to the day, and circuit founder Bruce Ropner.

Saturday’s pace-setting Mini Coopers initially duelled for the lead again in Sunday’s Historic Touring Cars race, before the Ford Lotus Cortinas and Warren Briggs’ menacing Mustang powered to the front of the field. Tim Davies broke clear in his Lotus Cortina – a tyre-smoking lock-up through the Complex notwithstanding – whilst Briggs muscled his way through to collect the runner-up laurels.

Mike Gardiner’s Lotus Cortina wound up third after the similar car of Mark Jones was forced into retirement – albeit not before posting fastest lap – whilst AC/DC’s Johnson made it two top ten finishes in as many races, hustling his Mini Cooper to eighth overall and class victory. And he clearly had a ball along the way.

“I absolutely loved the Croft Nostalgia Weekend,” he enthused. “I just wish it had gone on for longer! I think I got to drive in pretty much all conditions, from blazing sunshine to rain of near-biblical proportions! It’s a tricky, fast and fabulous circuit and I’m still learning it now! I’m pleased as punch to have come away with a trophy too.

“The racing was fantastic. I think the drivers here must get fed on raw meat before they go out – they certainly don’t go easy on newcomers! I saw some of the best driving I’ve ever seen. There was one Mustang that went past me completely sideways – I would have applauded but I would probably have gone off the track! There were little Hillman Imps like buzzing hornets – and I love these Minis!

“The camaraderie is superb, there’s a great atmosphere and the effort that goes into putting it all together is phenomenal. I’m a military history buff myself, so to see all the army vehicles and policemen in military uniform was absolutely awesome. Now I just hope I can come back next year!”

This week in racing history (August 3-9)