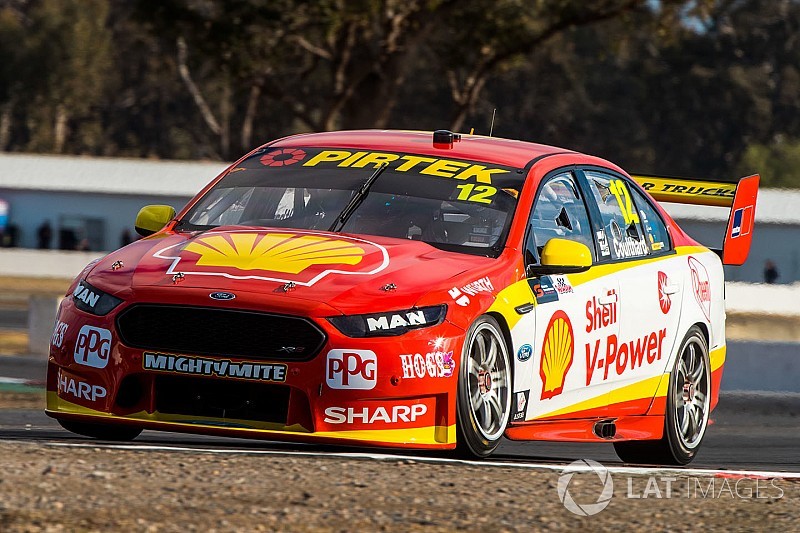 Coulthard got a massive free kick at the start of the race, the Kiwi arriving at Turn 1 all on his own after teammate and polesitter McLaughlin bogged down badly when the lights went green.

That meant Coulthard could streak into the lead ahead of Nissan drivers Michael Caruso and Rick Kelly, while McLaughlin was shuffled all the way back to eighth by the end of Lap 1.

From there, DJR Team Penske opted to split its strategies for its two cars. Coulthard was left out to set the pace at the front of the field, while McLaughlin was dragged into the lane on Lap 4 so that he could get some clear air, and short-filled in the hopes of getting track position as the first round of stops shook out.

And that's how it played out, McLaughlin floating back up the order to second place behind his teammate by Lap 22.

The trick was then staying ahead of the Nissans during the second round of stops, with McLaughlin still needing to take on a lot of fuel while Kelly in particular was shaping up for a shorter second stop.

However it turned out that McLaughlin had done enough during that second stint, emerging from his second stop on Lap 29 ahead of both Kelly, who had stopped a lap earlier, and Caruso, who came in on the same lap as the Penske Ford.

That meant it was a Penske one-two for the start of the third and final stint, but it didn't stay that way.

Shane van Gisbergen, who had run at the back end of the Top 10 in the second stint, opted to make use of the high grip and low deg and go long before making his second stop. He finally pitted on Lap 42, coming out just behind McLaughlin but with significantly fresher rubber.

On Lap 50 van Gisbergen cruised passed McLaughlin to take second place, before setting after Coulthard, who was a little over seven seconds down the road.

But van Gisbergen's charge was short-lived, the gap only getting down to six seconds before ultimately blowing back out to 11 seconds as Coulthard secured his first win since August last year.

"The Shell V-Power car was on rails today, it was a pleasure to drive," said Coulthard.

"I'm not sure what happened to Scotty [at the start]. It's unfortunate, it would have been nice to have the two Shell cars come through the first two corners one and two. It wasn't to be, but a one and three, an all-Kiwi podium, it's a pretty cool moment."

Behind the three Kiwis was Kelly and Caruso, who rounded out a successful weekend for Nissan Motorsport.

Holden drivers Scott Pye and Tim Slade were next, while Jamie Whincup never showed signs of troubling the frontrunners on his way to eighth.

Richie Stanaway finished ninth, a breakthrough result after a difficult start to life as a full-time Supercars driver. It was his best solo finish in the series, the Kiwi coming home as the lead Tickford driver, a spot clear of Chaz Mostert.

"It was good to get a clean race for once," he said. "It's just a bit of a weight off my shoulders. To be honest I never expected to have a race result where I'd be the first Tickford car home this early in the season. Hopefully we can keep improving, as we're always aiming to do."

David Reynolds had another difficult race, dropping more points in the title fight despite a valiant comeback to 16th from dead last on the grid.

He's now more than a round win behind McLaughlin in the points, while van Gisbergen had reduced the gap at the top of the standings to 131.