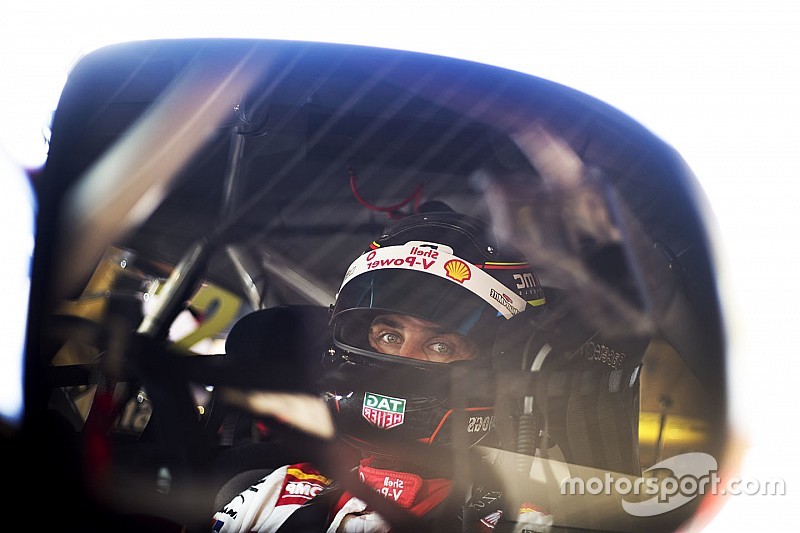 Wet conditions meant the low-grip specialists had a field day in the early stages of the session, Shane van Gisbergen leading the way 10 minutes in with a 1m36.029s.

Van Gisbergen then moved things into the 1m35s shortly after the 10-minute mark, before Chaz Mostert took over at the top with a pair of identical 1m35.285s laps 15 minutes in.

On the 20-minute mark the times took the next step forward, Mostert improving to a 1m34.402s. He was quickly joined in that bracket by the likes of Rick Kelly, Scott Pye, Mark Winterbottom, and Scott McLaughlin.

Five minutes later Anton de Pasquale fired his way to the top, a 1m34.370s leaving the star rookie three-hundredths clear of the field. His time in P1 only lasted a couple of minutes, however, with reigning champ Jamie Whincup going fastest with a 1m34.151s.

Having started to up his pace during that shift into the 1m34s, McLaughlin hit the front for the first time right on the half-hour with a 1m33.530s.

Mostert then chimed in with a 1m32.992s to go quickest, but was only there for a matter of seconds before McLaughlin took back over with a 1m32.504s.

While they were the first two drivers into the 1m32s, they weren't the last. Slowly improving conditions meant there was plenty of improvement in the final couple of minutes, kick-started by Coulthard going quickest with a 1m32.368s.

Mostert responded with a 1m32.339s, before Coulthard had two cracks at reclaiming top spot, narrowly missing out with the first despite a purple first sector, before nailing P1 with a 1m32.034s on his second.

"Yeah it was alright," said Coulthard. "It's slippery, it's lot of fun. A lot of it is track position and finding the grip. But you know, it's good start to the weekend. We were a little bit off at the start there, so to get back in the hunt was pretty cool."

Mostert did improve on his final lap, setting a purple first sector of his own, but fell 0.09s short of Coulthard's time after losing time squabbling with Jamie Whincup.

"It's only practice, it's one of those things," said Mostert.

"I knew there was only going to be one lap to go when I started my lap, and I was still trying to finish the last one before that. I knew I'd be compromised a little bit. In saying that, J-Dub was pretty quick out there too so it was good trying to get to the bumper of him before the line.

"We're at the pointy end, so we can't complain about that."

Whincup made late gains to end up third quickest, just three-tenths off Coulthard's, while Andre Heimgartner was the leading Nissan in fourth.

McLaughlin slipped back to fifth after not improving during the Happy Hour, while Mark Winterbottom popped up from the back end of the Top 20 to sixth on his final run.

Rick Kelly slipped back to seventh amid the late flurry of times, while Earl Bamber finished eighth after spending the second half of the session in van Gisbergen's Red Bull Holden.

Richie Stanaway and Simona de Silvestro rounded out the Top 10.