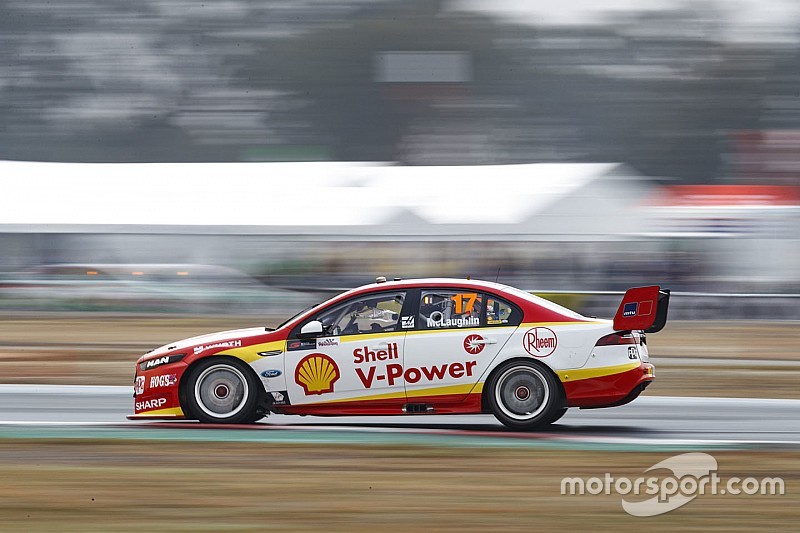 The Kiwi was the pacesetter across the entire session, sitting on top early with a 1m20.052s before improving midway through to a 1m19.288s.

He then found even more time on his final run, securing his 40th career pole with a 1m10.020s with a minute remaining.

"I thought it was going to be a 1m18s – I was chasing more," said McLaughlin.

"I was up and down in the seat. It was awesome, the car is fantastic. I just had to hit my marks, and we got it done.

"It's great for the team, another front row lock-out. Hopefully I don't balls it up like I did yesterday and we can have a good race."

McLaughlin's teammate Fabian Coulthard qualified second with a 1m19.139s right at the flag, while Rick Kelly and Michael Caruso made it an all-Nissan second row, as was the case yesterday.

Chaz Mostert was best of the Tickford drivers in fifth, edging out Walkinshaw driver Scott Pye.

The Red Bull Holdens were next, Shane van Gisbergen making up 15 spots on his final run to grab seventh despite an early run-in with Mark Winterbottom that resulted in a puncture. That late improvement bumped van Gisbergen's teammate Jamie Whincup down to eighth.

Winterbottom ended up way down in 18th after that squabble with van Gisbergen, with Craig Lowndes also struggling in qualifying for a second-consecutive day with the 23rd best time.

He still fared better than David Reynolds, who still start dead last thanks to a steering issue that's likely a hangover from his clash with Jack Le Brocq on the first lap of yesterday's race.