Starting from 24th, Justin sustained front splitter damage after making contact with another car in pit lane. The Team were penalised for the incident and were forced to serve a drive-through penalty. 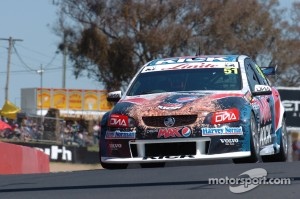 Justin re-entered the race a lap down and reported issues with the brakes. After a driver change on lap 37 Greg exited pit lane and discovered the car had lost all brakes.

He was able to drive the car back to pit lane where the Team discovered that the earlier damage to the front splitter had dislodged the brake ducts causing the brakes to overheat and cease to work.

The Pepsi Max Crew Commodore spent the next 12 laps in the pits receiving new brake pads, brake rotors and brake ducts. After re-joining the race in 21st position Greg was able to make up one spot to eventually finish 20th for the day.

"I went out of pit lane and had no brakes,” said Greg. “The brake pedal went to the floor because when Justin hit something it damaged the front splitter and knocked the brake ducts to the side.

When Justin came in for the driver change the brakes cooked themselves, so when I went out I just couldn't stop the car. The car was incredibly difficult to drive which was why Justin was struggling so much.”

"As I left the pits in the first stop I made contact with a car and it broke the bumper slightly,” said Justin. “But the brakes were overheating from around lap 4 so I'm not sure if there was something else going on too.

These cars are so much fun to drive and I really enjoyed it, but I wish we had a better outcome. I had a great time and did some good racing. I don't have a lot to show for it, but I have a lot of great memories."