The result also ensured that Holden can no longer be beaten in the V8 Supercars Manufacturers Championship.

The Jamie Whincup express has rolled on to a third straight win at Yas Marina, the championship leader taking yet another crushing victory in Race 26 today in Abu Dhabi.

He had to deal with an early-race safety car to do it - Karl Reindler and Jason Bright involved in a hefty crash at Turn 17 that halted competition for four laps - but otherwise it was a repeat of yesterday's two performances with an essentially comfortable victory.

In the middle of the day it was quite hot inside the car, but a fantastic victory for us.

The result also ensured that Holden can no longer be beaten in the V8 Supercars Manufacturers Championship.

“It was a very different day today,” Whincup said.

“Those Formula One guys lay some rubber down like you wouldn’t believe so we made some pretty decent changes to the car and it worked really well.

“In the middle of the day it was quite hot inside the car, but a fantastic victory for us.”

He beat Will Davison home by 1.1 seconds after the TradingPost FPR driver spent much of his race bottled up behind Tim Slade, the Stone Brothers driver having sliced past on the opening lap. 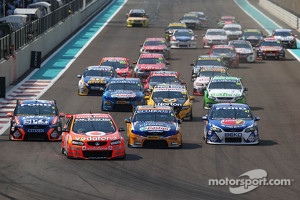 Davison started second however made contact with Whincup on the run to turn one and lost momentum, allowing the Lucky 7 Ford to draw alongside and take second position into turn four.

Slade held on to the position for much of the race however Davison was able to slip past in the final corner on the penultimate lap to complete a trio of second-position finishes for the factory Ford driver this weekend.

“At the end of the day it was a good weekend,” Said Davison.

“Three poles and three seconds are okay. I tried a different technique at the start but it didn’t work and I ended up having a good battle with Sladey. In the end, we couldn’t quite touch Jamie.”

“The boys have worked extremely hard all year and our last podium was back in May, so it’s nice to be back up here,” Slade said.

Winterbottom had been stuck behind Moffat for much of the race however scored a few vital additional points by passing the Team Norton DJR driver with a few laps to go.

It means the championship gap to leader Whincup now stands at 296 points with four races to go. 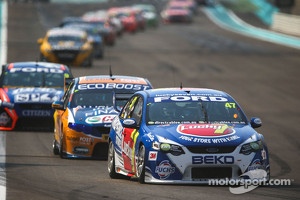 The race was marred by a massive crash that involved Jason Bright, Karl Reindler and Dean Fiore, on lap two.

Bright was turned around on the exit of turn 17 following contact from behind by Jonathon Webb’s Tekno Autosports Holden. With nowhere to go, Reindler – following several positions behind – smashed into Bright’s stricken Team BOC Holden.

Dean Fiore then heavily crashed into the rear of Reindler’s car, rupturing the fuel cell and causing it to catch on fire.

Reindler was able to get out of the car quickly and emerged without injury; however will have been reminded of his now famous start-line fire accident at Barbagello in 2011.

The V8 Supercars Championship will now travel from Abu Dhabi to Winton Motor Raceway in regional Victoria for races 27 and 28 of the championship, on November 16-18.