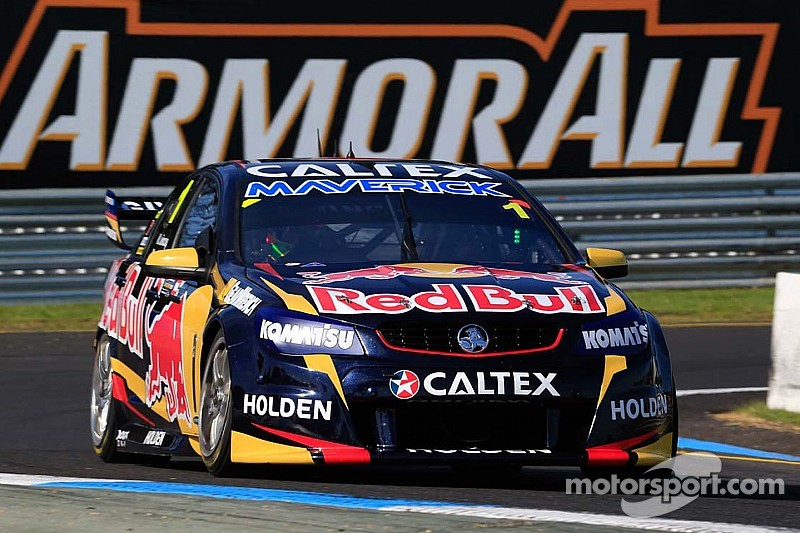 The 2014 edition of the Sandown 500 was another thriller that saw championship leader Jamie Whincup and co-driver Paul Dumbrell take the honors once again. James Courtney and Greg Murphy have put the horrid luck of the 2013 enduros behind them to finish second with Garth Tander and Warren Luff third.

I think a few of the drivers in the field never got the memo that this was an endurance race, not a sprint race. Lots of contact ensued as the race commenced but Paul Dumbrell and Jonathon Webb played no part as in the madness they got fantastic starts.

Andrew Jones lost his door panel before half a lap was even complete and would go on to make the highlight reel for more than one drama. Premat and David Reynolds really got into it, slamming doors down the straights before shoving on each other in the corners and going through the grass. Premat radioed in that Reynolds should get a penalty, but the officials thought otherwise.

Here's a bizarre one for you. During the first set of stops, Taz Douglas, who was sharing the car with James Moffat, came in. The fueling apparatus became stuck in the car and fuel was gushing out as they desperately tried to remove it. They were forced to take the car behind the wall and worked for over an hour to disconnect it.

Some kerb cones were thrown onto the track, so officials decided to place the race under full course yellow to rechieve them. Premat found himself stuck on the crowded pit road, costing him valuable positions.

Another stale race for Winterbottom

Mark Winterbottom has dropped off the map the past few races, losing a large championship lead and now facing a massive deficit. Things didn't get much better at Sandown. They weren't a factor and just before the final driver swap, Steve Owen took the car for a spin.

Lee Holdsworth made contact with Todd Kelly towards the final portion of the race, sending him spinning. He would face a drive-through penalty, but that was the least of his problems. Something broke on the Erebus Mercedes and he was sent flying out of control, making heavy contact with the tire barrier. He was shaken, but okay.

About that time, bad luck Bright came around and fate decided that it was done torturing he and Jones as the BOC car came across a wheel from Holdsworth's mangled machine. Their dreadful day was also over.

After the second and final safety car, Whincup was leading the way. A determined James Courtney gave chase, cutting his way through the pack and pushing multiple cars off course in the process. The HRT machine ran out of time though as Whincup collected the 2014 Sandown 500 victory for he and co-driver Paul Dumbrell.

Whincup has padded his comfortable lead with the victory, moving out to a 273 point advantage over teammates Craig Lowndes ahead of Bathurst. Mark Winterbottom is third, 279 points adrift of the lead.

NASCAR-style door numbers are catching on in V8 Supercars