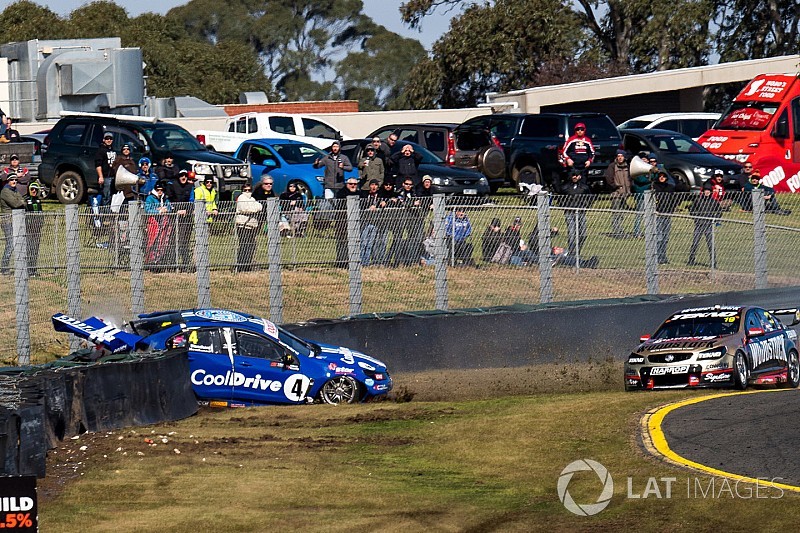 Jonathon Webb has been fined $15,000 for the role he played in Todd Hazelwood’s horror shunt at Sandown yesterday.

Webb and Hazelwood were battling with Nissan driver David Russell on the penultimate lap of Saturday’s co-driver qualifying race when a small lock-up from Webb at Dandenong Road led to contact with Hazelwood’s car.

The subsequent spin pitched Hazelwood into the wall and then into the air, the damage destroying the Brad Jones Racing Commodore but fortunately – and remarkably – leaving the driver unharmed.

Tekno owner/driver Webb has now been slapped with a $15,000 fine for the contact, half of which is suspended, after stewards charged him with ‘reckless driving’.

“Following a DRD investigation and an admission of Reckless Driving by Car #19, Jonathon Webb (making contact with Car #4, Todd Hazlewood at Turn 6), the Stewards imposed a penalty of a fine of $15,000 ($7,500 suspended until 31 December 2017) on Jonathon Webb,” read the stewards report.

Webb said that he had no complaints with the decision.

“I thought they were pretty fair and reasonable,” said Webb.

“I was in a catch-22. As a driver I wanted as little [a penalty] as possible but from a team owner’s point of view having consistency is what we’ve been working on with the stewards.

“Obviously no one loves a penalty but I can see their logic and see the consistency with what they’ve done in the year. It’s going to be what it’s going to be I guess.”

The stewards have also handed Shane van Gisbergen and Matt Campbell a two-spot grid penalty thanks to van Gisbergen sending Fabian Coulthard into a spin during yesterday’s practice session.

“It’s a weird one, being penalised for practice,” said van Gisbergen.

“It was a silly incident. Fabian was going so slow, wrecked his lap and I ended up running up the back of him.

“If that’s how it’s going to be in practice for the rest of the year I’ll get in his way every time. It’s pretty stupid.”

Simona de Silvestro and David Russell, meanwhile, have been dumped to the very back of the grid after de Silvestro held up Jamie Whincup in qualifying.

Steve Richards, who for the last two days was jumping between Craig Lowndes’s Triple Eight Commodore and his own BMW GT car, was fined $500 for missing the compulsory drivers briefing.