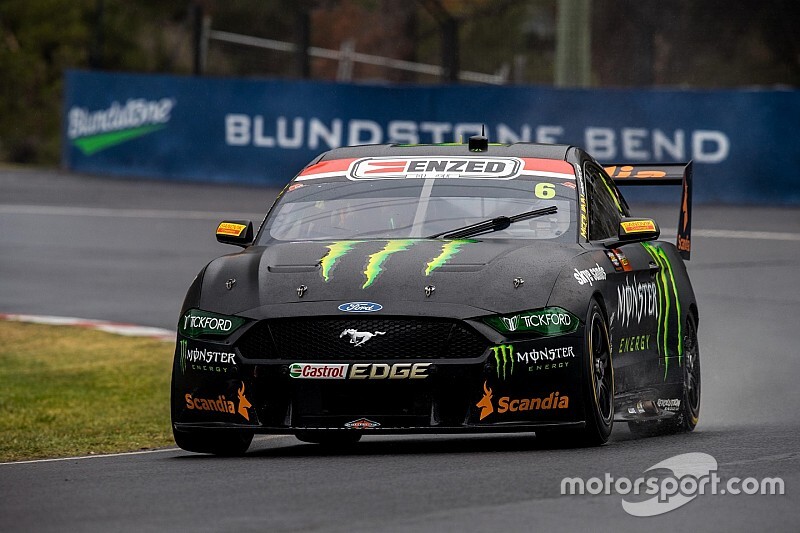 Cam Waters thought he'd be starting the 2019 Bathurst 1000 from the back of the grid as an engine problem left him stranded in the garage for most of today's qualifying session.

Having been among the pacesetters throughout practice, Waters' weekend was on the verge of unravelling in qualifying when his Tickford Mustang was hobbled by a faulty engine sensor.

There was only six minutes of the session remaining when the issue was rectified, Waters managing to immediately master the wet conditions and secure a Shootout berth with the eighth quickest time at the flag.

When asked if he through he'd be starting the Great Race from last as repairs dragged on, Waters said: "Yeah I did.

"I rolled around and had a really bad engine misfire. It took the guys probably half an hour to diagnose it and fix it.

"At one point they were all shaking their heads and saying they couldn't find it.

"At the same time I was thinking 'Chaz [Mostert] has won it for 26th'. But I was wanting to get back out there. It was lucky they fixed it."

Even once the engine was fixed Waters had a mountain to climb, the rest of the field having had the benefit of more than half an hour of running in the wet conditions.

He says a combination of big commitment and some knowledge retained from last year's wet practice running helped him sneak into the Top 10.

"I was trying to take in as much information as I could through every corner, and rely on last year's lines and experience," he said.

"Every lap I was learning. I did three timed laps and I was getting quicker and quicker. Even on the quickest lap I had a big moment and probably dumped at least half a second.

"I had to push. There was still definitely more in it. The guys who were going around for the whole session would have known where to push and where not to push.

"I was learning on the fly, that's why I had the moment. If I'd had a few more laps I would have been right up the front.

"I'm just ecstatic to make the Shootout. We've got a really fast car in the dry."