Lee Holdsworth has had a productive afternoon at a warm and sunny Winton Motor Raceway in central Victoria during practice for the penultimate round of the V8 Supercars Championship. 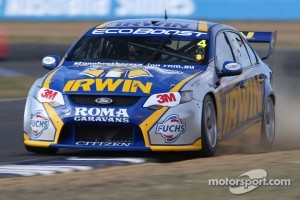 Sitting eighth in the championship standings, the IRWIN Ford driver watched the opening two practice sessions reserved for the bottom half of the field.

He then joined the first all-in session in the early afternoon, in what was the warmest conditions of the day.

The higher temperatures meant the track was not at its best, but the IRWN crew worked away on improving the balance in the car to be 16th quickest in the session.

During the final session of the day, conditions improved and with some further tweaks to the IRWIN Ford, Holdsworth set the eighth fastest time of the session, giving him the 10th best time overall for the day.

The IRWIN Ford crew kept all its fresh hard and soft Dunlop tyres in the garage, meaning they have plenty of rubber for qualifying ahead of tomorrow's opening 140km race.

Holdsworth was pleased with the session and the balance in the IRWIN Ford, which will be important on the high-wearing track in what is anticipated to once again be warm conditions.

What Lee Holdsworth had to say:


"I knew what the car needed to be quick around here and we were getting on top of it every time we went out," said Holdsworth.

"We knew it was going to hot, but the track changes so much during the day. Qualifying tomorrow will be in the middle of the day and we got a good lesson from today's running on what the car's going to need in that all-important session.

"We did a degradation run at the end of the final session to get a handle on how the tyres will stand-up on continuous driving. It's so important here to have a good balance and a car that will look after its tyres.

We saw last year here that times dropped by over two seconds a lap; which is a huge margin in our game. We feel pretty confident we have that area sorted heading into Saturday."

Pye gets a feel for Winton in Dunlop Series Practice