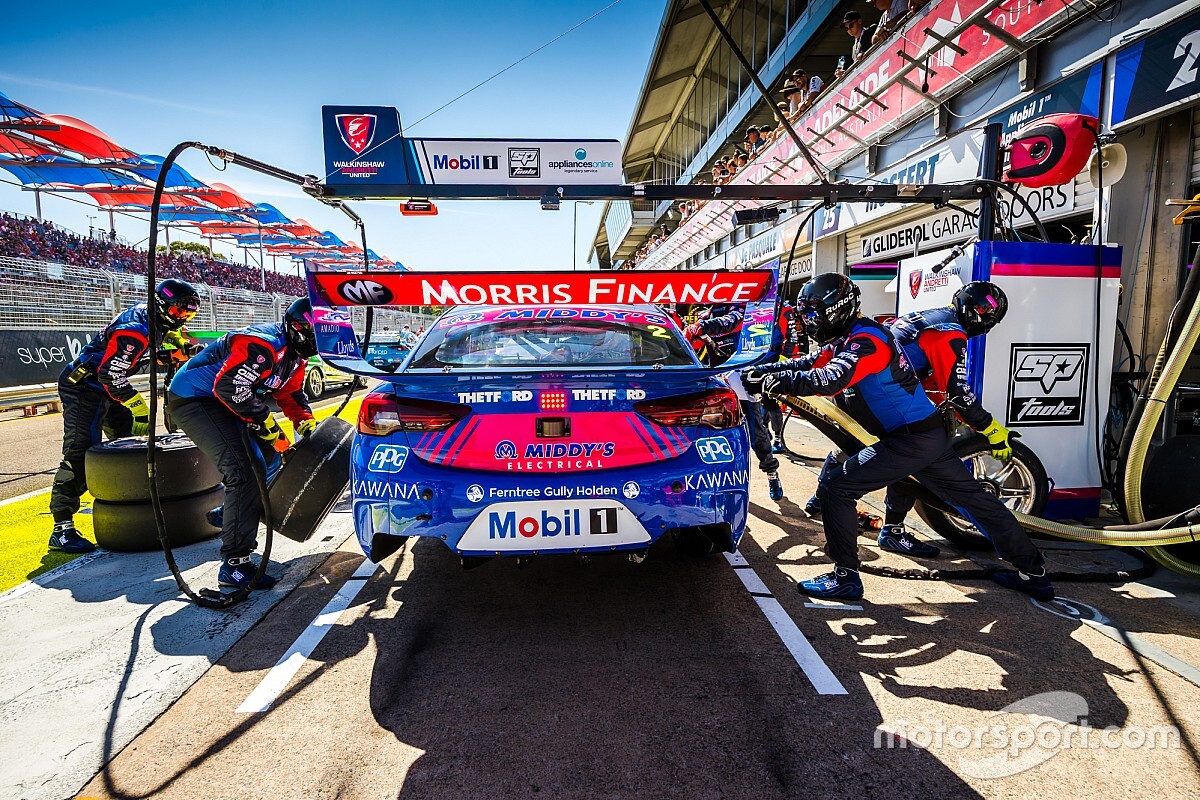 Ryan Walkinshaw says he's asked rival Supercars teams to engage in an informal freeze on development during the ongoing break in racing.

The 2020 Supercars season is currently on hold until at June at the earliest, with a very real potential for the pandemic-induced suspension to run longer than that.

With the break casting serious doubts over the future of teams and the category itself, Walkinshaw thinks team should bring development to a near standstill in order to keep costs as low as possible.

He says his own Walkinshaw Andretti United squad has stopped development work, and that he's contacted other teams asking them to do the same.

"We've pretty much banned most developments during this period," Walkinshaw told Motorsport.com.

"And we spoke with a bunch of other teams in Supercars, and said the same to them because I, personally, think that for the good of the sport, all teams should really stop development right now.

"It's just not smart for anyone. It's not a wise decision considering the issues that are happening around the world.

"One or two teams may be happy to go and continue spending loads of money on development, whilst everyone else is focusing on survival to a certain extent. I don't think that's in the best interest of the sport.

"At the same time, it's a free market, it's a free world and you can't stop anyone from doing what they want to do. But from our perspective, and I know a lot of other teams in Supercars, a lot of us have agreed to work together on this and to minimise developments so that we don't all start pushing each other into making stupid short term decisions that may harm us all long term.

"So all teams have a responsibility to each other and to themselves, and to Supercars, to make the most prudent decisions today, in order to have a category with every single REC still racing when they eventually do hit the hit the track back in anger again."

According to Walkinshaw the feedback from rivals regarding the freeze has been mostly positive.

"At the end of the day you never really know what people are doing behind closed doors. But I think most of the team owners out there are pretty rational, prudent business people," he said.

"If you're going to spend $2 million during this period to develop your car, then that's fantastic. But having that kind of that kind of technology race during this sensitive time is only going to force everyone else to do it as well.

"So I think most people understand that and respect that and are making the right decisions there, from what I know at least."

A freeze in development would almost certainly de-rail any plans for a new model to join the series next season in the wake of Holden's closure.

Having led calls for a Holden replacement for 2021 before the coronavirus pandemic worsened, Walkinshaw concedes it has now evolved into a highly complicated situation.

"The idea of spending money on Gen3 and all that sort of thing – you don't want to lose opportunities that are going to cause long-term harm to your business because of the short-term issues that you have," he said.

"But at the same time, when there's no understanding whatsoever about the longevity of this crisis, it makes these decisions very difficult.

"I don't envy the people in positions at Supercars that have to make those decisions on what we do with Gen3."

While the season is currently suspended until June, Walkinshaw isn't banking on a return to competition coming that soon.

Instead he's bracing his team for a six-month wait, which means elements of the team are effectively in "hibernation" for now.

"No one's going to sit here and judge anyone's decisions that they make when trying to have a sustainable business," said Walkinshaw.

"It's, frankly, a horrible situation worldwide. And you know what, there's a lot of people and far greater strife than than we are.

"I think that the impacts of this from our perspective, on what we're planning, is that this will go on for much longer than June, July.

"It would be nice for the trends that we're seeing Australia to continue, because that's looking pretty positive. But we've got to work on the worst-case scenario.

"So we're looking at six months and anything earlier than that is just a benefit. So part of the business has been in hibernation since April.

"Supercars will be under pressure from not having revenue from certain events, so that may have impacts on distributions. So far Supercars has been fantastic with supporting us there.

"We've got to respect the fact that some of our partners may potentially be coming up to us in a couple of weeks or months and saying 'hey we need to have a discussion about how we balance out the cash going in', because all of our partners from all of the teams are going to be going through the same issues that we are, just in a slightly different way.

"Our key focus at the moment is that we will take a little bit of pain, but the plan is at the back end of it, everyone's still got a job. And that's the real focus.

"We're all in it together. And we're all in it for the greater good of the team and all of our teammates, which is what's important."