The Giz Fights To Victory In Dramatic Second Sprint

SHANE van Gisbergen has won a stunning second Qualifying Sprint Race and has secured pole position for the Dick Smith Sandown 500 in the process.

The Stone Brothers Racing driver won a thrilling 20-lap race that saw the top four drivers in the championship all strike dramas in a brutal race of biff and barge.

David Reynolds finished second and Garth Tander grabbed a last-gasp podium after passing Tim Slade on the final lap to secure third place – but it was the SP Tools Ford out in front racing away to a second win in the pace of two hours. 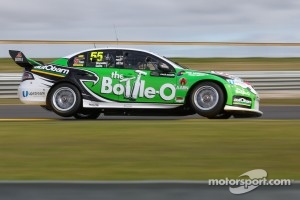 The result counts as the first career pole for the New Zealander.

“To be on the pole tomorrow is great – it’s a long race but this is a good start,” van Gisbergen said.

"The start wasn’t as good as I had hoped. It gripped up but then I got on the old surface and it spun up again. I had quite good speed on Jamie, and after the Safety car I thought I could have a go.

"We can get a result with this car tomorrow. It’s a long day but I’m sure we can do it"

After the comparatively drama-free co-driver race earlier in the day, the full-timers pulled no punches with the action commencing from the opening lap.

Whincup made the best start but title-rival Davison was the first in the wars as he ran wide at Dandenong Road on his own, dropping from a podium spot to outside the top 10.

A lap six safety car to recover the stranded Team iSelect Commodore of Taz Douglas calmed things momentarily, but the biggest drama was yet to come.

An apparently slippery surface caught out some of the biggest names in the business, starting with a three-time champion.

Craig Lowndes ran wide on the first lap back under racing conditions, dropping from third to the middle of the pack; locking a brake much like Davison and running off all on his own.

On Lap 13 Whincup then followed in his team-mate’s tyre tracks, running wide and into the sand at the same corner. The point’s leader recovered down the field, only to run wide again at turn four on the following, beaching his Commodore in the Tyre bundles before recovering in 20th place.

Though the dramas van Gisbergen pulled away from David Reynolds to take the win and secure pole for he and co-driver Luke Youlden for tomorrow’s 500-km enduro.

The net result for the title contenders was Lowndes 7th, Winterbottom 16th (after starting last) and Whincup 19th.

Will Davison failed to finish the race after sustaining damage to the left-front suspension after a three-car contact at turn one occurred when James Moffat passed Lee Holdsworth on lap 10.

Webb in particular ended the race battered and bruised after a particularly heated battle with James Moffat earlier in the race.

The Dick Smith Sandown 500 will be held over 161 laps tomorrow afternoon, commencing at 13:30pm local time. A short, 20-minute warm-up session will be held in the morning as a final systems-check prior to the big race – the first of the ‘season of endurance’ this year.