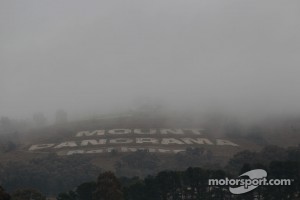 PRACTICE for this weekend's fifth round of the Fujitsu V8 Supercar Series has been slashed in half after the cancellation of today's second practice session at Bathurst.

Fog at the top of Mount Panorama delayed and eventually forced the cancellation of Practice 3 for cars in the Supercheap Auto Bathurst 1000, with conditions no better later on, forcing the abandonment of Practice 2 for the Fujitsu Series.

Mostert set a 2m33.5741s, backing up the strong wet weather form he displayed in the last round at Queensland Raceway, where he rocketed through the field in Race 2 and finished fourth and set the fastest lap of the race after starting from pit lane.

Nick Percat, who will co-drive this weekend in the main race with Tander, was third fastest; clear of Taz Douglas, Paul Morris, James Brock (who won a 300-kilometre Bathurst Tourer race in the wet at Mount Panorama in 1999) and Tim Blanchard.

The full field of 28 cars took to the track to begin practice, though former Touring Car Masters champion Gavin Bullas found the wall on just his 10th lap of practice in his V8 Supercar debut.

His Eggleston Motorsport squad has withdrawn his Commodore after the damage was deemed to bad to continue for the rest of the weekend.

The Fujitsu V8 Supercars Series will return to the circuit tomorrow morning for qualifying at 8.35am (AEDT) before Race 1 at 1.20pm.

Both Fujitsu Series races will be shown as part of Seven Sport's coverage of the Supercheap Auto Bathurst 1000 and will also be streamed by BigPond Sport on its V8 TV channel online.

Erebus Motorsport on early accident in 3rd practice at Bathurst 1000