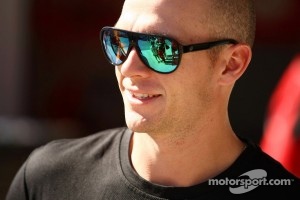 Stone Brothers Racing has signed Lee Holdsworth on a three-year contract from 2012 for the V8 Supercar Championship.

Holdsworth will replace Alex Davison in the #4 SBR/IRWIN Tools Falcon and will make his first race appearance in a Ford Falcon at the Clipsal 500 in Adelaide in March.

SBR co-owner Ross Stone said the signing of Holdsworth was another significant point in his operation’s history, which includes championships in 2003 and 2004 with Marcos Ambrose and 2005 with Russell Ingall.

Holdsworth will be a teammate to Shane van Gisbergen and Tim Slade.

“The V8 Supercar Championship Series is the most competitive of its type in the world and you have to keep chasing what you think will give you an advantage over the opposition,” said Stone.

“The opportunity to sign Lee was presented to us, and Jimmy (Stone) and I thought he would be a great asset in 2012 and then into 2013 with the introduction of the Car of Future.

“Unfortunately in situations like these someone is left out of the mix. That is the tough nature of this business.

“Alex (Davison) has improved year on year with us and we believe he has a place in this championship and we will do what we can to help him secure another drive.

“The best way we can do that is by giving him the best car we can in the remaining three rounds of the championship this year. I am sure he will be keen to finish as high as possible in the championship standings.”

Holdsworth has been a part of the Garry Rogers Motorsport operation full-time since 2006 after cutting his teeth in the National Commodore Cup Series.

He is currently eighth in this year’s championship and has his sights set on finishing higher than his seventh place result of 2010.

“First of all I have to thank Garry Rogers Motorsport for the past six years and Garry for giving me a serious shot at V8 Supercars,” said Holdsworth.

“There has been a lot of speculation about my career in recent months, but we have not been in a position to announce anything until now.

“SBR are a championship-winning team and I look forward to moving back from Melbourne and being a part of the Queensland-based organisation in 2012.

“In the meantime, I look forward to getting the best results possible for GRM, Fujitsu, Holden and all of Garry’s sponsors in some of the biggest events of the year over the next several weeks.

“My goal is to finish higher than seventh in the championship and I can only achieve that by beating SBR and everyone else.”

Davison was obviously disappointed with today’s announcement, but was professional in his reaction.

“I am obviously extremely disappointed with Ross and Jimmy’s decision,” said Davison.

“I am in the top 10 in the championship and believe I have done enough to be in the V8 Supercar championship. My hunt for a new drive is well and truly on.

“I have to thank IRWIN for their support and friendship and want to ensure them that we will be doing everything we can to win every race remaining in 2011 – nothing has changed in that regard.”

IRWIN Tools recently announced a two-year contract extension with SBR, and is looking forward to growing its commitment to the program, according to IRWIN Tools Asia Pacific Vice-President, Nick Pritchard.

“We would like to sincerely thank Alex for all his efforts on and off the track for IRWIN Tools in the last three years,” said Pritchard.

“He is an outstanding person who we have built a strong relationship with.

“He is a very good driver and has been a great ambassador for our business, and friend. We wish him nothing but the best for the coming years of his career and will be following him closely.

“We respect SBR’s decision on their driver change and look forward to working with Lee for at least the next couple of seasons.”