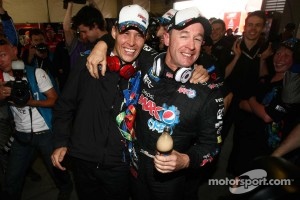 Murphy qualified provisional fifth in Friday’s qualifying session, his lap today of 2:08.8009 taking top spot on the timesheets from Will Davison.

When rain began to fall on the top of The Mountain with the final three cars still to run, Murphy’s pole was assured, giving he and Danish co-driver Allan Simonsen the first grid position for the start of tomorrow’s 161-lap race.

Stratco Racing driver David Reynolds was unfortunate to suffer mechanical problems in the rear end of his #16 Stratco Commodore on his Top 10 Shootout lap. He and co-driver Tim Blanchard will start from seventh place on the grid.

“I think it is a little bit of a shock in some respects,” said Greg Murphy.

“I loved every second of the shootout. I am stoked we have managed to do that for the team and Pepsi Max of course. It was just sensational.

“You have to put it on the line when you do these laps. I expected it to be fast and the way it felt I actually thought it was going to be quite a bit quicker than that.

“Clearly the day has had some rain and other stuff and the track was not as fast as we thought.”

“It is massive. I knew I wanted to be on the grid. People need to understand that things are pretty tough in this game – she’s a hard series to be in.

“Unless things are going the right way and you have the right people you are not going to achieve.

“There are only so many teams out there that do it well and Kelly Racing is starting to prove that they can match it with the best of them and I love driving with them.

“It’s a reward for everybody that has believed in me and just great for the team.”

WHAT IS IT WITH THIS MOUNTAIN AND GREG MURPHY?

“I’ve got no idea, I just think it is the best bit of track and I have so much respect for it.

“You need to understand if you have the chance to race in this championship, in these cars around this track you have got to be on it.

STARTING FROM POLE CAN YOU WIN TOMORROW?

“I think we have the car to win the race tomorrow, everything so far has gone really good.

“There is no reason why we can’t. There will be a lot of things that get in the way and try and stop us, including a few other cars with some bloody good drivers on board.”

“That’s a big result for our team,” said Rick Kelly.

“Murph has been super strong all weekend and that lap was just incredible.

“There was wet weather there threatening on that lap. If there was rain or no rain I am confident that lap would have stood.

“He has done an exceptional job and the Kelly Racing garage has done so well all weekend.

“That is very, very special to be able to achieve that at this track.

“Every driver up and down pit lane aims for that all year and to have Murph achieve that in the Pepsi Max Crew car is very big.

“It is Pepsi Max’s first year in the category and that is a great reward for them for their investment and their faith in us.

“Murph is certainly a guy who can deliver at times like these. He has also set himself up very, very well for the race as well.

“We are really looking forward to the race for Murph and for the other three cars as well. Then we also have Grant (Denyer) and Cam (Waters) in the fifth car as well.

“The guys in the Kelly Racing garage have done an incredible job in the first two and half years and in particular this year with cars constantly in the top 10.

“It has been a tough ask recently with getting five cars ready for Bathurst. Everyone has had to do two or three jobs at once, so the pole is a great reward for that effort.

“It certainly puts a smile on their face and helps build confidence and team morale for the weekend.”

“I am extremely proud, the whole day just gone off to a very good start,” said Allan Simonsen.

“Coming off the last practice session, we had a good car and we go to P1.

“Murph went out in the Shootout and did an awesome job and got P1 on a very committed and amazing lap and then we got a bit of luck with the weather.

“But even with the weather, it was a fantastic lap. We saw people struggling to beat Will’s lap and then Murph goes out and does it, so we are really happy.

“We are looking forward to tomorrow now. I’ll just try and focus on doing a good job in supporting Murph, bring the car back in good race condition for him and hopefully we have a good run in the race in the Pepsi Max car.”

“It’s a long day tomorrow and that’s what I need to keep reminding myself,” said David Reynolds.

“It did not go to plan at all. The car felt amazing. I was quickest or second quickest across the top so my Stratco Commodore is handling really well.

“But I noticed some smoke coming out of it on the warm-up lap and it sounded really, really bad – like a Melbourne Taxi.

“It actually pumped oil out of the diff so I guess it was probably testimony to the Castrol product left in it that we made it through the lap.

“I can look at like it was good that it happened today, or bad because that is where we could have shown our true speed and had a car that could have been on the front-row pretty comfortably I think.

“We definitely have a good race car for tomorrow – wet or dry the car is a jet. Tim can do his job well and I think we have a good show.”