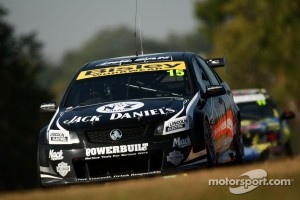 The black and white Commodores of Jack Daniel’s Racing will both start from the sixth row of the grid in tomorrow’s L&H 500 at the Phillip Island Grand Prix Circuit in Victoria.

A poor start saw Rick Kelly drop back from sixth to 11th place on the first lap of his qualifying race, but a solid recovery had him finish in sixth place.

Both Jack Daniel’s Racing co-drivers did a commendable job at Phillip Island today, with David Russell and Owen Kelly finishing 20th and 22nd respectively in their qualifying races, both drivers completing the compulsory pit stop that each entry must complete in one of the two qualifying heat races.

Will Davison and Luke Youlden will start from pole position for the L&H 500 ahead of Garth Tander and Nick Percat, with Shane Van Gisbergen and John McIntyre to start from third on the grid.

David Reynolds and Tim Blanchard will start from seventh place aboard Kelly Racing’s #16 Stratco Commodore, alongside the #11 Pepsi Max Commodore of Greg Murphy and Allan Simonsen, which will start from eighth place.

“I made some good ground off the start on the first lap. I passed a reasonable amount of cars and I was just a little bit too kind after the first two laps and really burnt up the tyres stuck behind another car.

“The #7 Jack Daniel’s Commodore had really good pace though, but stuck behind someone I burnt the front tyres off of it.

“From there I struggled a little but still had good pace, the same pace as the cars around me.

“I should have had a bit more of a crack in the early laps there but it's not the worst result in the world.

“We will tweak the car a little bit now that we know what it does over a race distance and hopefully we have a good run tomorrow.

“Murph did an awesome job today as well to be third in his qualifying race. The team is knocking on the door. Hopefully we will be battling amongst ourselves towards the front tomorrow.”

“We started off the day quite well in practice,” said David Russell.

“I was quite happy with how that all went and then in qualifying I didn't quite bang the time out that I wanted.

“I'm not sure what changed in the period of an hour between practice and qualifying but I just couldn't bang a good time out, even on better tyres.

“But Todd did a great job in his race. He was really solid and I was glad in my race that I didn't have any incidents, although I did get hit from behind by David Besnard when he misjudged his braking mark entering the pits.

“We had a good pit stop and out of the pits I was happy with my out lap on cold tyres. I think I gapped the car that was behind me by about four or five car lengths on that lap.

“The first set of tyres that I was on were the set that Todd raced on in the first qualifying race, so I was much happier when I got a better set of rears at the pit stop. That allowed me to catch the cars in front of us pretty quickly.

“It would have been good if there was another 10 laps because we would have made up a lot of spots. Hopefully our Jack Daniel's Commodore is good over a long stint tomorrow in the main race.”

“We haven't quite got the complete package for the race at this point,” said Rick Kelly.

“I made a massive, massive error at the start and didn't get off the line well at all. It's probably the worst start I've done in years.

“I'm quite disappointed with that because I could have been up in around second or third position, which would have given us much better points towards the grid position for tomorrow's race.

“We need to work on the car because when we are in traffic it's very difficult to pass so we really need to focus on that and try to tune the car up a bit because it's not quite where it needs to be.”

“We are chipping away at it session by session,” said Owen Kelly.

“We haven’t found a set-up balance that we are happy with just yet. It’s not great but we are heading in the right direction.

“We will make more changes overnight and use the morning warm-up to learn more about the car.

“My heat race went OK. I did the pit stop as planned and just kept the Jack Daniel’s Commodore straight.

“We will start from 12th so it’s not the end of world but we would rather be higher up. We will see how we go tomorrow.”