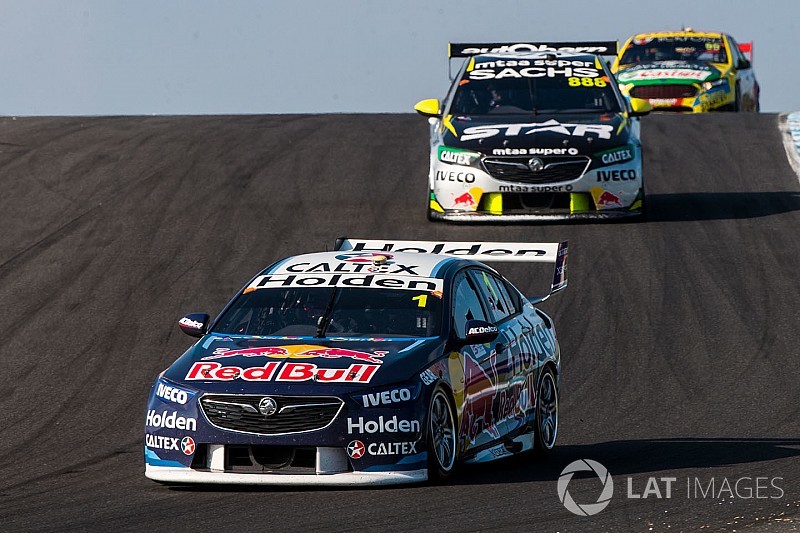 An inability to find the new ZB Commodore's set-up sweet spot at Phillip Island is being blamed for Triple Eight's drop in performance relative to the pace-setting DJR Team Penske outfit.

The brand new ZB Commodore came into the Phillip Island weekend as the car to beat, having won seven of the first eight races of the season, five of which went to Triple Eight drivers.

That run was tipped to continue over the weekend too; having raised eyebrows with its aero efficiency so far this season, the aero-heavy Phillip Island layout was expected to be well-suited to the new Holden.

However for the first time this year the ZB genuinely wasn't a match on car speed for Penske's FG-X Falcon, and even struggled to match Rick Kelly's Nissan, with David Reynolds the only Holden driver to finish in the Top 5 on Sunday.

According to Triple Eight team manager Mark Dutton, the lack of overall speed came down to the T8-designed ZB not responding to changes on the flowing Island circuit, something he says was unexpected given how user-friendly the car was at the first three rounds of the season.

"It’s responded really well to the tuning up until now," said Dutton.

"We, and I’m guessing other [Holden teams] as well, just couldn’t hit the sweet spot – apart from Erebus with Reynolds. They were legitimately there on pace. It’s reassuring, because it lets you know that it’s not a fundamental [issue] with the car, the car can perform here.

"It just wasn’t as easy to tune. That’s been its big strength, for me anyway, this year so far. The good start, it came about because it was really responsive to changes.

"So the engineers and the drivers could work with it and tune it for each track condition and this weekend it wasn’t easy.

"We were doing logical steps, smart steps, working late, working hard, and it wasn’t working to the same affect."

While less than ideal, Dutton said a bit of head-scratching is not uncommon with a brand new car.

"It’s a new car, that’s to be expected," he said. "Especially one that is so different, it’s such a different architecture, you do expect it to be dramatically different. We’ve just been really fortunate that, the earlier rounds, it proved to work well with us. [At Phillip Island] it was a bit harder."

Worst hit by the car's lack of speed was Jamie Whincup, who was nowhere pace-wise on Sunday after losing his decent haul of Saturday points to a penalty.

All Whincup could manage on Sunday was fifth in qualifying and ninth in the race, Dutton confirming it was a case of missing the set-up window as they tried to tune the car.

"In qualifying on Sunday, [race engineer David] Cauchi tried something, and it all made sense – of course it did, otherwise you wouldn't do it. But it didn't make the car faster and it didn't make a tangible change to the characteristic of the car either."

Dutton added that Sunday was effectively all damage limitation for Whincup, a conservative approach necessary to make sure the reigning champion could at least keep his points tally ticking over.

"It's just one of those instances where you sort of have to mitigate the damage, just drive, conserve... he wasn't going to make up a lot of spots, so you try and minimise the amount you lose," he said.

"He was definitely conserving, the car had more pace in it than he was showing. But not enough to do anything exciting.

"You have to drive smart, and that's what he did. When you have your bad days, you've got to minimise the damage that you do. Obviously we did a bit more unfortunate damage [on Saturday] than we should have, so it was worse weekend by a long shot compared to what the finishing places on the track were."

Whincup has slumped to fifth in the points, 142 behind new leader Scott McLaughlin.