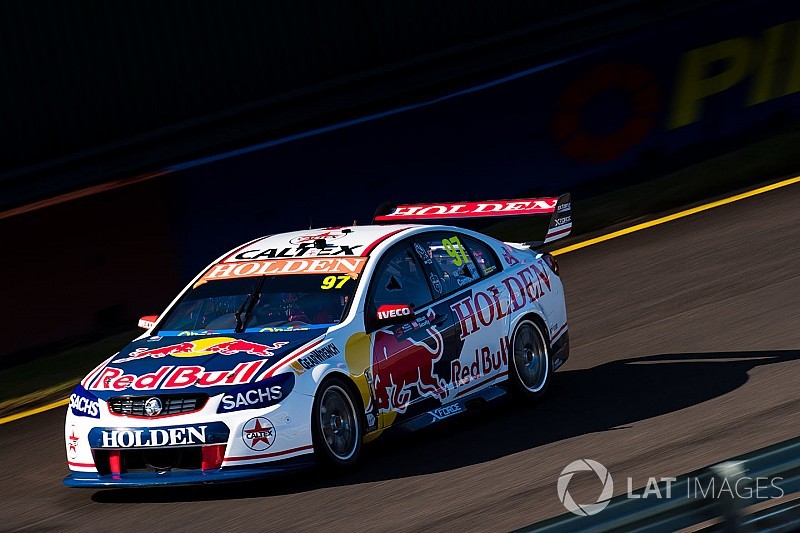 Triple Eight team manager Mark Dutton says the team has to take responsibility for the tyres failures that cost both of its Red Bull cars dearly during today’s Sandown 500, rather than blame external factors.

Paul Dumbrell and Jamie Whincup were in contention for victory early on, before Dumbrell suffered a right-rear blowout 15 laps into the second stint. The pair recovered to come home sixth, salvaging valuable points for Whincup’s title tilt.

Shane van Gisbergen and Matt Campbell were then hit with a right-front failure less than 20 laps from the end while van Gisbergen was scrapping over third spot with Chaz Mostert in the Prodrive Ford.

While external factors such as the outside of the kerbs could well be at play, particularly in Whincup’s case, Dutton said it was important that the team accepted that perhaps it was too aggressive on camber set-up – even if it didn’t realise it at the time.

“You’re always being aggressive, you push hard… but we didn’t think we were close to the limit,” said Dutton.

“If anything we thought we were on the conservative side, without being overly conservative. That’s why it was totally out of the blue.

“There are times where you hold your breath the whole race, because you know you’re pushing the boundaries. This wasn’t one of those times.

“I think we got a few things a little bit wrong, and they added up to being enough wrong to cause the punctures.

“We do have to analyse – we had a rear one one and a front on the other. And we did our homework, we did our due diligence. We had 20-lap lead-up races, so to do one in 15 laps on the #88 car it definitely caught us off guard.

“We thought we’d done our homework, so to do one in 15 laps was really odd.

“We’ve got to put our hand up and say we were wrong. We didn’t have monster camber on, but clearly we must have had too much on.

“We have data to pore over, and we won’t get the answer because the tyres are destroyed. We do have to check the differences between the cars, see what all the tyres that didn’t blow look like, and do some really good homework.

Aggressive camber has been a flashpoint several times this season, most notably at Phillip Island where a spate of tyre failures rocked both races.

Today, however, failures were few and far between, Whincup admitting that while he’s certain it was a kerb that led to the failure on his car, the team has to take ultimate responsibility.

“What caused it? Certainly our blowout was caused by Turn 1, the exit of Turn 1,” he said.

“But we were really on the limit [with set-up] as well, so we’ll put our hand up and say we should have done a better job as a team.”

Whincup added that he was lucky to come home sixth and only drop to 84 points behind leader Scott McLaughlin, having dropped to back of the field thanks to the puncture.

“We were genuinely 20th and 50 seconds off the lead, and there were no Safety Cars, we got no help at all,” he said.

“So we made our way back up through good pace. It could have been a lot worse.

“That’s what team work is all about, and that’s what wins big races and championships. All those one-percenters. We didn’t do the best job this weekend.”

‘Aggressive approach’ pays off for Prodrive