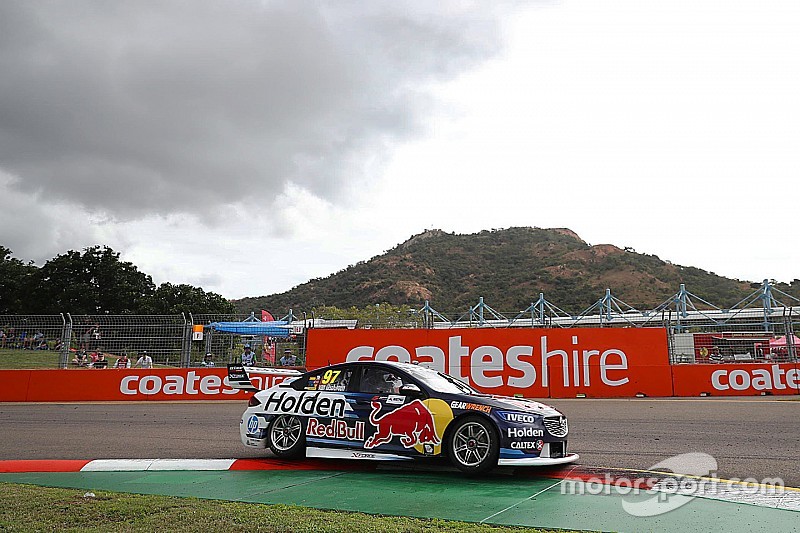 Jamie Whincup spent much of the session on top thanks to an early 1m13.192s, that time not beaten until well inside the final 10 minutes when Lowndes lowered the benchmark to 1m12.912s.

But it was Lowndes and Whincup's Triple Eight teammate van Gisbergen that had the last laugh, the Kiwi going quickest with a 1m12.670s with two minutes of the session to go.

"We had decent tyres, but the car felt pretty good," said van Gisbergen.

"We were all up there from the start, which is a good sign, now we’ve just got to keep up with the track.

"Hopefully the weather holds out. I don’t think we’ve ever had a wet tyre on the car yet. We’ll see what happens."

David Reynolds' session got off to a smokey start, his Erebus Holden shedding a power steering line on his first run. He was back out within 15 minutes, and ended up second fastest thanks to a 1m12.746s inside the last minute.

“We had a small steering failure. You probably saw the smoke pissing out the rear of my car,” he said.

“The steering went heavy, so we came in, bled it, reconnected it, and it was alright, we just lost the first couple of runs."

Lowndes – who this morning announced his impending retirement – ended up third, while Whincup was fourth after improving on his early time with a 1m13.062s.

Rick Kelly was the best-placed Nissan in fifth, ahead of James Courtney and leading Tickford driver Chaz Mostert.

Andre Heimgartner and Scott Pye were next, with Lee Holdsworth rounding out the Top 10.

Both of the Penske Fords were off the pace, Scott McLaughlin just 12th quickest while Fabian Coulthard was way down in 22nd.

"We just ran the one set [of tyres] and had an idea where the track was at, did our time and then did a 15-lap stint,” said points leader McLaughlin.

“Obviously we know the degradation over the last few rounds has been a bit different. It felt alright.”