Tough day for Jack Daniel's Racing on Sunday at Winton

Jamie Whincup clinched his fourth V8 Supercar Championship at Winton today, but the race proved to be a tough one for Jack Daniel's Racing’s Rick Kelly who started 21st and Tim Blanchard who started 24th.

Championship leader Jamie Whincup got the initial jump from pole position on Davison, but by the end of lap one Davison had resumed the lead. 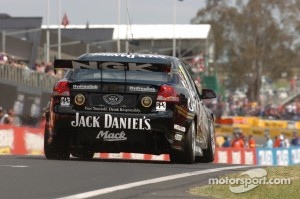 By lap five Kelly was 20th with Blanchard 26th. Blanchard was showing good pace and kept Lee Holdsworth at bay for many laps.

Shane van Gisbergen pitted early for new tyres as Kelly and Blanchard both moved up the field over the next five laps and were 18th and 23rd after 12 laps.

James Moffat suddenly slowed on lap 15 triggering a safety car, but no sooner had it been deployed, Moffat got going again.

Kelly and Blanchard, like most of the field, pitted under the safety car and resumed in 18th, (Kelly) and 24th, (Blanchard).

Racing restarted on lap 18 with Davison and Whincup running side by side into the fast sweeper, but Davison ran wide and Whincup shot through, into the lead.

Jamie Whincup served a drive through penalty on lap 26 for a pit infringement and dropped back to 22nd.

By half distance the top five were Mark Winterbottom, (the only other championship contender), Davison, van Gisbergen, Craig Lowndes and Tim Slade, with Kelly 16th and Blanchard 20th.

Kelly and James Moffat had a spirited dice from laps 49 to 55, swapping positions until Moffat got the upper hand. Two laps later Fabian Coulthard, on newer tyres also passed Kelly.

By lap 60 Whincup had driven his way up from 22nd to 3rd behind team-mate Lowndes and Winterbottom, with Rick now running 18th and Tim 21st.

Rick Kelly: “Today was one of the toughest races we’ve had all year. We made a few changes overnight for qualifying and tried to improve the car.

“Unfortunately it went the wrong way for us and I possibly could have done a better job. We found ourselves a little further back and we got bashed around a little bit in the opening laps as you expect.

“Once the race settled down we quickly realised the changes we made from qualifying to the race hurt us again and it was very difficult to drive. On soft tyres the pace went away even more. We will regroup and go to the last race and put on a good show”.

Tim Blanchard: “We didn’t have the tyre pace or tyre life we were looking for today, which made it a hard long race. We were able to come away with a straight car and a few points which is the main goal for us”.

IRWIN Racing cuts through the pack at Winton

Team BOC best of the rest on race 2 at Winton