In the afternoon's second race Bright got a clean start from third but was passed into Turn One by Whincup who went from fifth to first in the space of three corners. 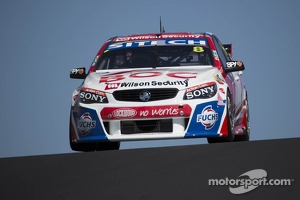 In that race Bright was forced to race hard after a misstart from second on the grid saw him drop back a row and then get sucked further down the order by the bumping and pushing around Turn One.

He recovered to run eighth behind the safety car restart on lap 17 but was on the grass a lap later after locking up into Turn Two. He crossed the line 23rd, setting the second-fastest lap of the race in the process.

The final round of the V8 Supercar Championship season will be the Sydney 500 from December 6-8.

Jason Bright
Team BOC
"My start was good in the second race. Jamie only got me around the outside of Turn One because he was on a mission and I was happy to have a clean start. It was brilliant to watch him. He went around my outside at Turn One, past Frosty at Turn Two and Craig on the exit. He was in the lead by Turn Three. It was very impressive.

"I got passed by Shane Van Gisbergen but managed to get him back at Turn One and I was pretty happy with that. You don't get to do that every day so I had some good racing this weekend. I had a good battle with Garth through the Hayshed as well. I reckon they were two of the best moves I ever made.

"In the first race I just mucked up the start, which put us back in the crap. We were in the outside lane all the way through Turn One but still in fourth or fifth. Then all the bumping started and the cars in the outside lane got tangled up and I lost a heap of positions.

"Then I locked up going into Turn Two. It took me by surprise and I couldn't get the wheels spinning again. The tyre wasn't flat spotted; I couldn't' see a mark on it so it was a really weird lock-up. I don't know what happened."

Top of the times for Coulthard at Phillip Island